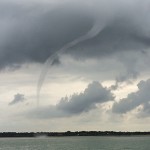 On Monday 30th June, one of our instructors snapped this tornado from Batida in Southampton Water, but it wasn’t the first he has seen in the area.

James Porter, was skippering Batida, towards the River Hamble, when he spotted this tornado.

“I noticed an area of white on or near the shoreline,” said James. “I couldn’t make out whether it was spray/foam or sand at first. Then I saw the funnel reaching right up into the clouds and realised it was a tornado.”

“To my surprise the tornado seemed to stay in the same place for at least 10 minutes, and then came and went for a further 20 minutes as we got closer. There was a second one a few hundred metres north, near Netley, I think.”

This is the first time James has managed to get a picture of this meteorological phenomenon, but the second year in a row he has seen one in the same area. 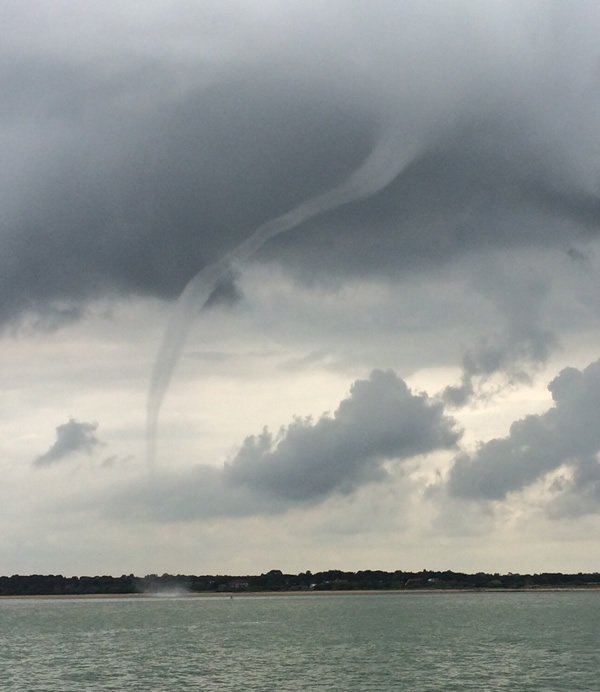 “Last spring I was sailing near Netley and was struck by a tornado. The wind was only Force 3, but there were black clouds scudding about. A really black cloud came over and I suddenly saw an area of white foam 100 metres wide, racing towards me across the water.”

“I had only the mainsail up and tried to turn towards the tornado but was struck side-on. The yacht was knocked flat, masthead touched the water (we later had to send someone up the mast to straighten the wind indicator).”

“The yacht immediately came upright and the tornado quickly moved away and then disappeared. No-one was thrown out of the yacht, but it was a frightening experience!”

“The fact that this has happened twice to me, and in roughly the same area, makes me wonder if Southampton Water’s shape tends to produce tornadoes.”

If you can think of a suitable nickname for Peter, or have had a similar experience, then leave a comment below or join the conversation on Google+ and Facebook.

And if this is your first visit to First Class Sailing welcome aboard, we’ve plenty of RYA sailing courses available, plus we recently published the findings of our survey on the UK’s Coastguard Closures, they make very interesting reading!