Who You Gonna Call?… Coast Busters! 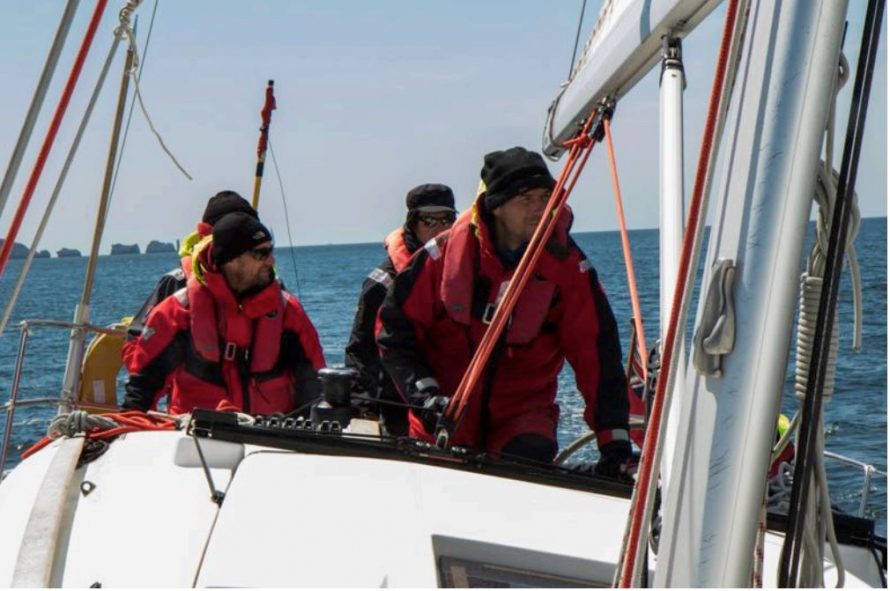 Who ya gonna call?

This blog was written by one of our instructors for Sailing Today and published in their magazine. Sailing Today have kindly let us post it here. Instructor Clive takes us through a recent Coastal Skipper Course to Dartmouth, and explains what to expect on your course and how an instructor helps the students achieve a successful outcome.

The RYA Coastal Skipper qualification is the next step up after Day Skipper and while the Day Skipper is designed to show that you are able to take charge of a small cruising yacht by day in familiar waters, the Coastal Skipper extends these boundaries to longer passages and night time sailing.

The particular course described in this article is probably more adventurous than most, and so it should not be taken as ‘typical’. An instructor will always take many factors into account when planning a course and these will include the experience of the crew, the boat, the weather and viable cruising destinations. I hope the following will give anyone considering doing a Coastal Skipper course a good idea of what to expect and the reasons for doing it in the first place. On this course, I had four people doing Coastal Skipper and one doing Competent Crew. Our boat ‘Manhattan’ is a Jeanneau Sun Odyssey 379.

I see the Coastal Skipper course as an opportunity for crew to experience a wide variety of sailing activities under different weather conditions. I like to push the boundaries and expand each crew’s comfort zone. The idea of this is not to give everyone a hard time, but rather to equip them with the tools and experience they are likely to need at some stage of their sailing careers. You don’t have to sail for long before something will inevitably go wrong, or at least not go fully according to plan. The ability to think coolly about a problem and come up with a seamanlike solution is to me what the Coastal Skipper qualification is all about.

In many ways planning a Coastal Skipper course is very like planning a charter holiday. The start date is fixed and the boat needs to be returned to base by a certain date and time. You also want to have as much fun as possible and do a bit of exploration. The more research and preparation you can do before the holiday the more likely you are to get the very most out of it. You can decide on the best harbours and anchorages to visit, and those to avoid, and come up with at least an outline plan of what to do and when. For this reason, rather than leave all the passage planning until the start of the course, I prefer to give the crew the opportunity and the required information to do a rough outline plan for the whole 5 days a few weeks in advance. This is strictly voluntary, and only if they have the time and inclination. I find this also helps get people in a nautical frame of mind, and most crews consider it to be worthwhile. Of course, I do my own passage plan as well, but it is always good to see what the crew come up with. 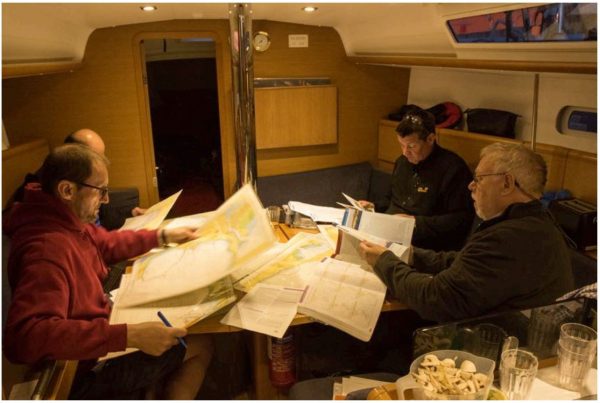 I wanted to give each of the four Coastal Skippers the chance to be in the hot seat for a passage of 45-55nm. Such a passage may be expected to take around 8 hours and as such imposes a very different mindset to that needed for a shorter passage. Furthermore, this is not just one passage of 8 hours, but a series of four 8–hour passages in close succession, and with a few shorter passages of 5-10nm thrown in for good measure. I came up with four ‘missions’ and when we met up at Shamrock Quay the evening before the start of the course, we drew lots to see who would get which mission.

For each mission, I just stated the proposed start and end locations. The ‘skipper’ for each leg was advised to assume all responsibilities for the boat including such things as getting the weather forecast, preparing the boat for sea, and all instruction of the crew for departures and sail handling, arranging berths etc. My aim was for me to do as little as possible so that the skippers were making the decisions as if I was not there. I just answered any questions that came up and quizzed them on possible alternatives. All departure timings were left to the skippers to work out, and they also had to work together to make sure everything ‘joined-up’. 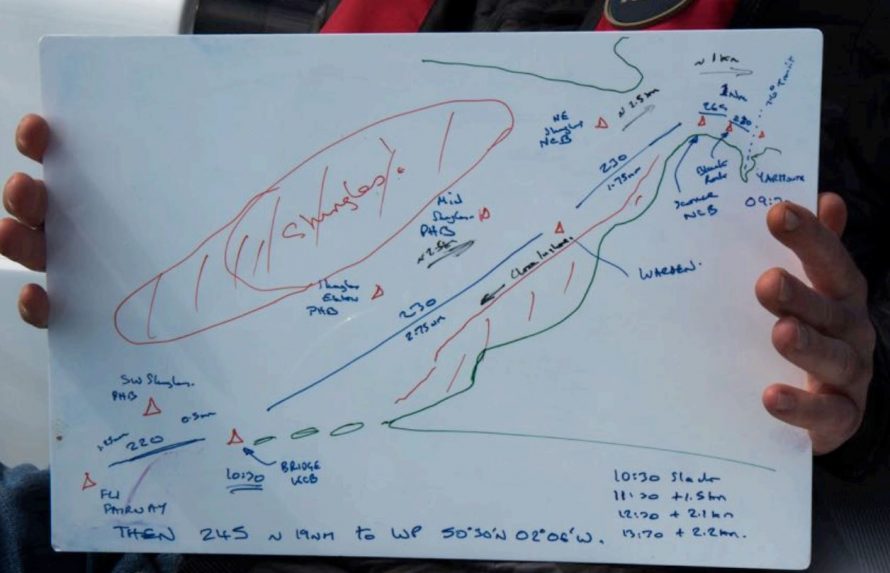 The following summarizes my thought processes in coming up with a plan for the course and this is what I conveyed to the crew on the first evening to give them some guiding principles (also see Passage Planning Primer). I decided to set quite an ambitious target and had the aim of getting from the school’s base at Shamrock Quay in Southampton, to Dartmouth and back within the 5 days of the course. This is a distance of at least 240nm. With such a long passage to accomplish it was tempting to think we should set off straight away on the Monday morning or even the night before, but I decided it would be better to spend Monday getting used to the boat and practising manoeuvres. I also wanted to position the boat in Yarmouth at the western end of the Solent ready for the start of the voyage-proper on the Tuesday. The basic idea was to ride the tide whenever it was flowing in the right direction, and to hole up and rest in a safe haven while it was going the wrong way. I also wanted to include at least one passage to be undertaken at night, with the somewhat romantic experience of a dawn arrival. An instructor is always conscious of the necessity to get the boat back in time for the next course, and the same deadline applies if you are on a charter holiday. With this in mind I wanted to get the long passages over with as early as possible, so if we were held up for any reason (engine problems etc.), that we would have some time in hand to recover the situation. This meant that the plan soon evolved into an easy first day, followed by a pretty intensive Tuesday and Wednesday and then a more leisurely Thursday and Friday. As it happens this also seemed to work well as far as tiredness was concerned. We were certainly all tired by the time we docked up on the Wednesday night, but we could then afford to relax a bit and recharge the batteries during the rest of the course.

Weymouth, and the adjacent harbour at Portland, are conveniently situated about halfway to Dartmouth and make obvious stopping off points. With the Needles Channel, the races off St Alban’s Ledge and Portland Bill, and an active firing range to negotiate, this is a challenging stretch of coast that deserves respect. As such, it is in my view a perfect area for an adventurous Coastal Skipper course.

Time on passage is never wasted, and there are always opportunities to do additional activities like three-point fixes, to go over safety equipment like flares and EPIRBs, and become familiar with the chart plotter. 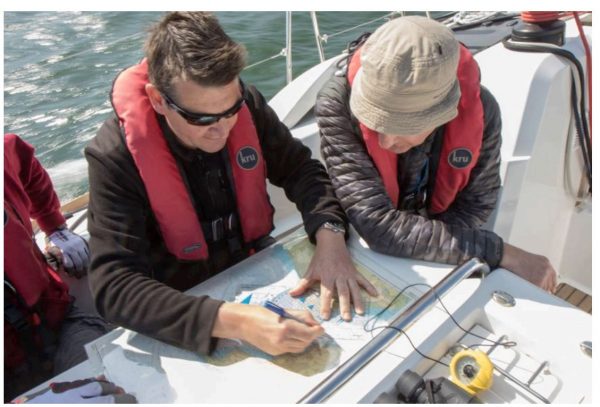 What about the Comp Crew?

Although nominally a Coastal Skipper course we also had Competent Crew Joe coming along with his friends Henry and Neil. I always like to push everyone on the course as much as possible, but it is important to make sure that the basics of seamanship such as might be covered in a dedicated Comp Crew course are not overlooked in favour of more Day Skippery tasks. I gave Joe ownership of various important duties such as switching off the gas bottle at night, all foredeck duties like anchor deployment and mooring buoy pickup, and the traditional deployment of our ensign. And, of course, he was fully involved as crew for sail handling, helming and coming alongside. I also tasked Joe with being our skipper for the final day of the course – this gave
him four days to pick up enough knowledge of passage planning and pilotage before being in the hot seat himself. One very important aspect of being a skipper is explaining what is happening to
the crew, and nothing tests your own knowledge better than trying to explain it to someone else. I was therefore delighted to see all the skippers involving Joe in the planning processes. 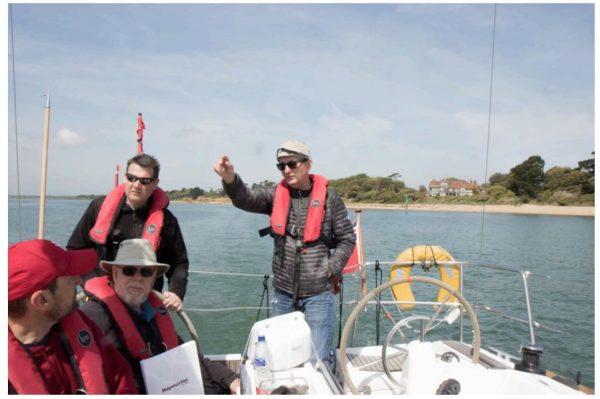 I asked the crew what their highlights of the trip were and these included both the best and worst conditions. On the way to Brixham we had simply perfect conditions, with a northerly F4-5, and could sail on a beam reach at typically 9.5 knots over the ground, with slight seas. Add to that the thrill of sailing through the night and the company of a dolphin, and it was some of the best sailing I have ever experienced. We only had to tack twice in over 100nm! The worst conditions were on our way back to Portland, with the now easterly wind being exactly wrong for the passage, but such is the nature of cruising, that some motorsailing is inevitable. This also gave us a wind-over-tide situation as we were skirting the Portland Race as midnight approached. In the F5 wind and steep waves the boat was slamming down a bit and I began to wonder if I had overdone it. I asked helm Daniel if he was OK and got the reply “I am having the best day of my life!”. 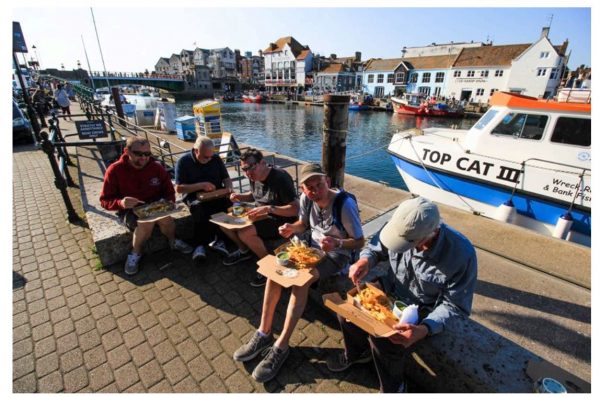 Clive Loughlin is an RYA Yachtmaster Instructor and regular Sailing Today contributor. Clive teaches for First Class Sailing in the Solent area (and beyond!).

The aim is to get from A to B safely in the shortest time
Check access limitations (height of tide) at A and B
Get hour-by-hour tidal stream data for the route
Check for hazards and how to avoid them
Aim to ride the tide as much as possible
Aim to avoid going against the tide as much as possible
Get a weather forecast
Consider wind-over-tide implications
Plot where you expect to be by when
Regularly plot position to see if ahead or behind schedule
Keep a log, and operate a watch system on longer trips
Have backup plans and alternative destinations
Is the passage viable and sensible?