So, the gang were back together again with a warm welcome to our new crew member David… for one more day of training and our first race, the De Guingand Bowl, an approximate 110+ mile race around various buoys within the channel. Over the long weekend we had fantastic sailing in light airs, strong breezes, bright sunshine, cloud and the odd rain shower. Excellent cuisine made by Tee and her brilliant team of varying helpers kept everyone’s energy and enthusiasm high not to mention the silly galley banter of jokes and tips keeping everyone laughing. The team is gelling superbly as we are developing our skills and knowledge in what is required to race our Challenger. Learning how to adapt to living together as a group of 16 in what is a relatively small space has been our challenge this weekend together with the introduction of the watch system. 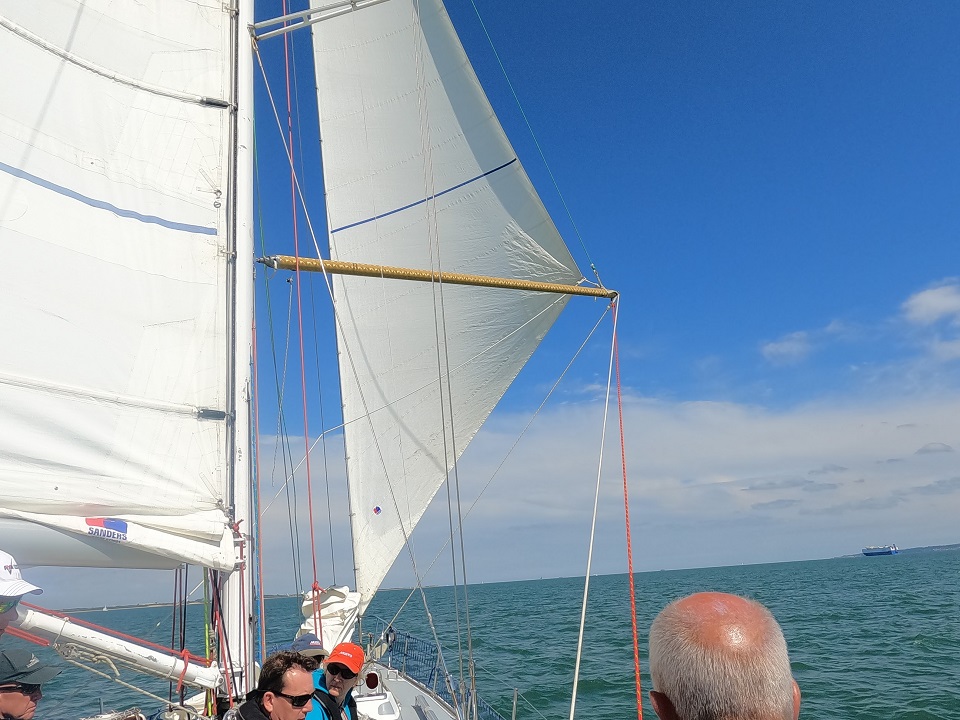 Friday was all about drills. Numerous tacking, gybing and reefing drills to bring everyone up to speed again. The weather was superb, bright sunshine, clear sky and light airs, it was hats and suncream all day and the relative calm allowed us to practice, practice, practice. And you know what they say, practice makes perfect.   We didn’t seem to have forgotten too much from the first training weekend, and before long we were back in the swing of things, covering off the drills almost like clockwork.

Man over board was again practiced with a repeated warning from Mark our watch leader ‘Avoid getting in the blue stuff, but don’t worry we’ll pick up your body an hour or so later’ Ummm!! On a lighter note we again practised downwind using the preventer and the spinnaker pole was again lifted to goose the Yankee on our downwind leg back to Portsmouth. During our lovely sail back Mike our First mate explained the race details using a white board to draw the race route and rules regarding clipping on and the use of the safety lines around the boat was discussed. At the end of the day watch teams and bunks were allocated for the race ahead. Skipper Mike in an ‘interview’ commented ‘I thought the team may have taken two steps back with the gap in training weekends but they haven’t, I am really pleased, and surprised at how the team has come together and I have every confidence for tomorrow’

Off to the pub for a quick relax and then off to bed, excited for the following day.

It was an early start.  Our class start time was 8:20am at Cowes and so we slipped lines at 6am, finished preparing the boat and had yummy BLTs for breakfast on the way. We arrived to a melee of around 70 boats circling around the start area trying to achieve the best racing start position and not “jump the gun”. Smaller boats went off first and then it was our turn, we worked hard to not go over the line and cause ourselves a start recall penalty. At the gun we crossed the line perfectly and sailed gently across in the light airs.  It was tack, tack, tack all of the way out to the Solent forts, leaving ‘No Man’s Land’ fort to starboard we headed out to the English Channel and south. Challenger 2 was slightly over the line at the start and had to go round again, though they made excellent gains on us and by the end of the first long run we were in sight of each other which kept us focussed on our sail trim skills. 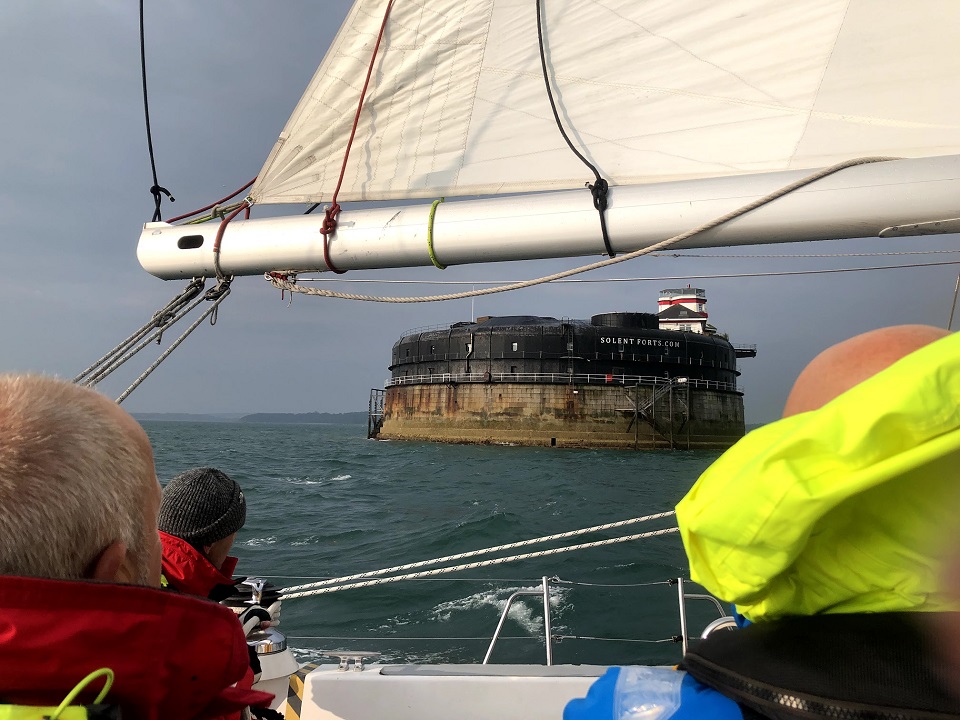 The watch system was introduced allowing those off watch to prepare lunch of cheese rolls and rest. Cups of coffee and tea were in flowing supply and the biscuit box was always out, with indepth discussions onboard regarding favourite biscuits, is it fig rolls or ginger biscuits? Umm difficult decision.

After a few hours we veered south to cross the 50 degrees 25’.000N latitude as part of the race course rules then turning north to continue tacking upwind towards Brighton and the Rampion Wind farm just off the coast.  We spent most of this run heeled over at 30*,the weather was good, sunny, chilly, with a steady 10knt wind so no need for oilies with Skipper Mike, Adam and Ray adamantly remaining in shorts despite the progressively chilling wind.

We headed a long way into the channel where the wind picked up to 15kts and tacked for the run in towards Brighton with the tide. Here we made 8knts most of the way.  Watches were shifting every 3 hours, and at each change of watch we were putting on more layers as the night drew in. However it remained humid, and thermals were not strictly necessary.

Sliding around in ya socks!

Port watch went below at 1am as Starboard watch came on deck to an increasing wind and heel. Tee was trying hard to make an excellent spaghetti bolognaise at what felt like a 45 degree angle down below decks in what was closely resembling a fairground fun house. The watch changes were initially completely crazy with those coming down the steps and those going up on deck, people were trying their best to remove wellies and oilies as the next watch were trying to get theirs on, the boat heeled and lurched to the increasing wind which is not a good plan when you’re in woolley socks on a wooden floor at a 45 degree angle! It doesn’t always end well! but we all kept our humour as we desperately grabbed any handhold available as well as trying to eat our bolognaise pinning ourselves to anything solid. 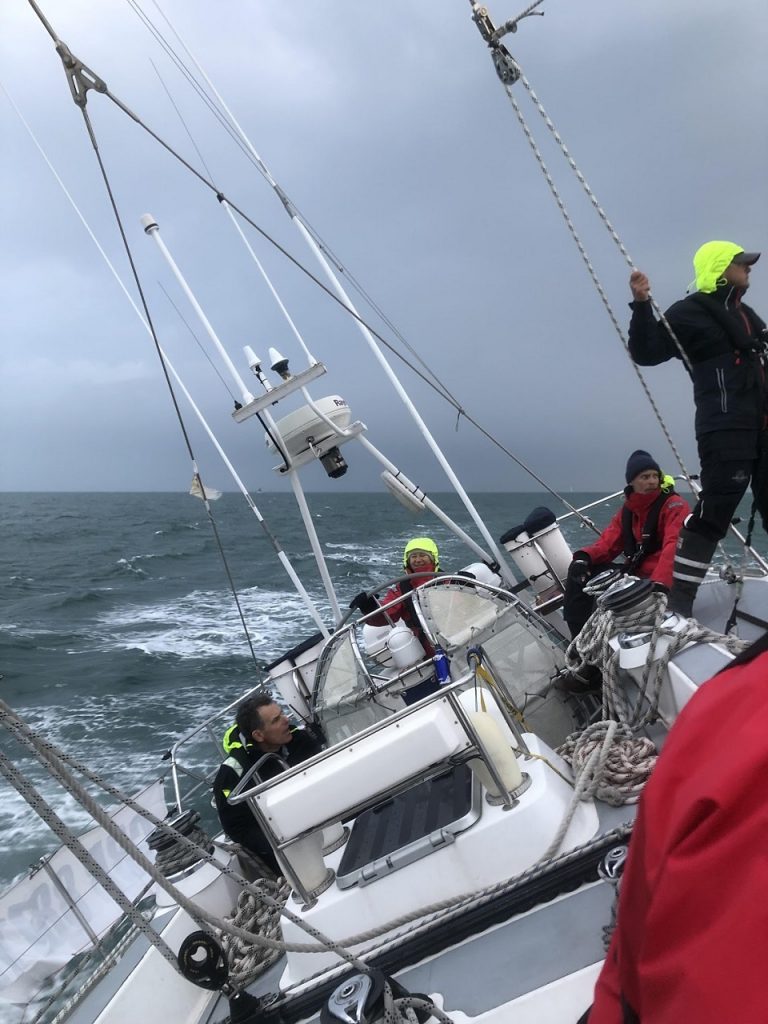 As the Port watch slept the wind increased further as Starboard watch began to put in a reef, the power of the wind was so much that the Cunningham snapped halfway through the process, down in our bunks we heard the very loud crack and the desperate sounds of the rush to secure the reef and the lines. They all did amazingly well to fix the problem but It was at this point that Challenger 2 edged past us.

As we arrived at the Rampion wind farm, its lights flashing on and off in the darkness we saw Brighton’s bright lights glowing along the coast. We looked out for the green starboard lights of boats that had already made their way around the first mark with Tee making her way forward to find the mark.  Rounding the mark we bore away to begin our downwind run, fixing the preventer and shaking the reef out. It was remarkably calm and relatively flat downwind, a real contrast, without the wind chill it was a temperate night then the rain started. Oilies on, the Starboard watch put in a gybe and settled in for the night for the sail back towards the Solent.

Waking up at 4am to a strong wind and taking the helm I (Sharon) was handed chocolate cake and custard. I thought ‘I hope I don’t see this again’ as I ate it as our Challenger heeled ever more in the strong wind, Luckily I didn’t!! Thank god for Stugeron! The sail was amazing, we sped at a steady 8 kts with tide as we rounded the three markers on our homeward stretch. It was rainy and warm as the strong wind and gnarly sea state caused the boat to heel so far as to wet the gunnels.

Porridge across the line

Blue sky approached us as we headed for the finish line of the De Guingand Bowl Race and porridge was made, again eating at a jaunty angle. Starboard watch sailed us over the finish line at 08.30 with a loud clap and cheer from all of us on deck. It was once again time for shorts, sun hats and suncream. 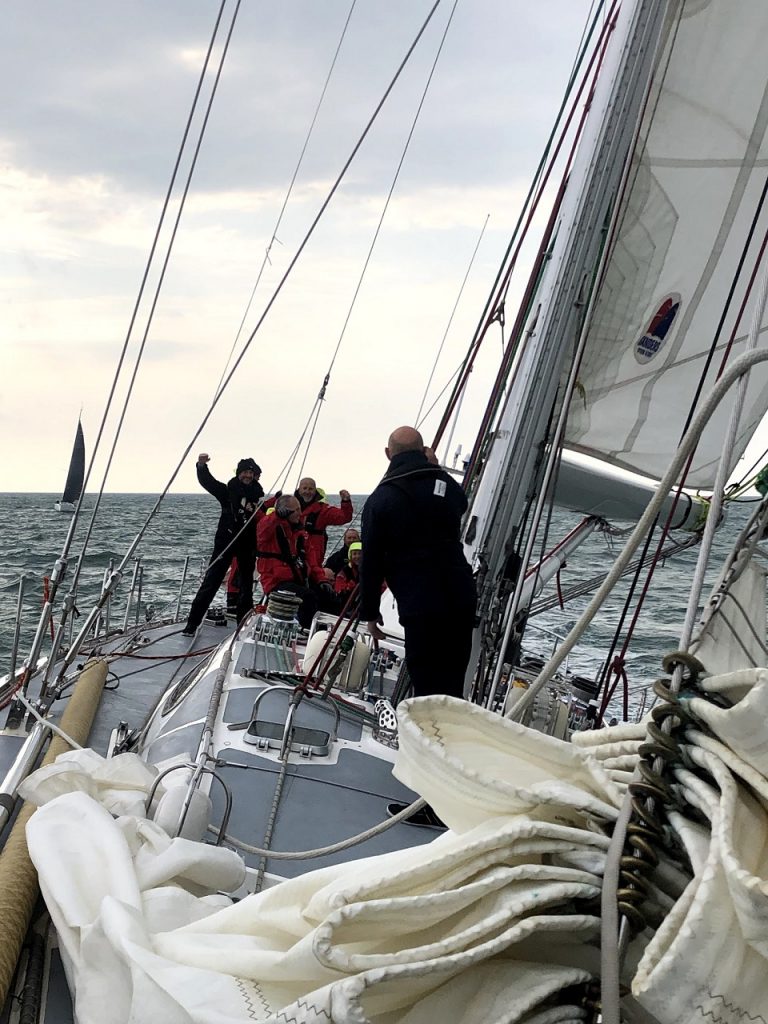 Tired and elated after our first 24 hour race, we headed into the marina to put Challenger 1 to bed. After a briefing and lunch in which we were all very happy with the race and discussed what we had learnt and enjoyed and Austin explaining that his ‘apprentices’ Dean and Ray had done a sterling job! we headed home happy but very tired. We all reported sleeping like logs that night! Fabulous race, fabulous fun and really looking forward to our next race the ‘Round the island’ race next weekend, excellent.

For details of this years Fastnet that will also lead to Fastnet 2023 in due course have a look here: https://www.firstclasssailing.com/rolex-fastnet-sailing-race-2021