Should Holding Tanks be Compulsory in British Waters? 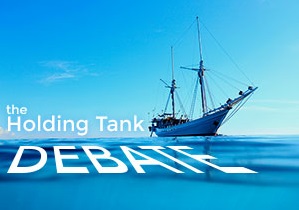 We want your opinion about holding tanks!

Should they be compulsory in British waters? Or should sailors be allowed to put black and grey water into the sea?

Below you will find a survey about holding tanks and if they should be compulsory in UK waters. Once we have collected the opinion of sailors and interested parties we will prepare a report. Click here to take the survey or read below for the background information.

We’re not the first to bring up this issue, in fact The Green Blue have been highlighting this issue and other environmental concerns since 2009 and you can find more information on their website www.thegreenblue.org.uk.

The Green Blue’s resources helped us make this Google Map of Coastal Pump Out Stations.

If you have a boat constructed after 2006 then it will have a holding tank, but do you use it when sailing in British waters?

Harbour authorities report that many vessels with holding tanks do not use them regularly. Even though sailors are strongly encouraged to use holding tanks in many European waters, and it is compulsory in the Mediterranean, in British waters it is down to personal discretion.

There are already some laws in place. In MARPOL Annex IV big ships are not allowed to discharge unless they have an approved sewage treatment system and are three nautical miles from the coast. However if they are 12 miles out they can dump raw sewage.

The question we are asking is: should it be compulsory for all vessels to use a holding tank when sailing the UK coastline?

As part of our series of Eco blogs, First Class Sailing are hosting a survey to discover how sailors feel about holding tank use and if it is the right time for British based seafarers to play their part in keeping the oceans clean.

But do we really need to worry about putting our waste into the sea? Below are the arguments for and against but if you already have an opinion take part in this survey now.

Does a Ships’ Waste Water Affect the Sea?

While the amount of waste from recreational vessels is relatively small, it can still have a localised effect on sea life. Raw sewage, or black water, contains microbial pathogens, and these can be harmful to humans who may come into contact with them through swimming or other water sports.

They can also be ingested by shellfish, which can cause Paralytic Shellfish Poisoning if then eaten by humans. It is also thought that sewage and grey water (waste from the sink) can reduce the local oxygen supply available to marine life in the area.

The Problems with Black Water

Black water releases nitrogen and phosphorous into the sea. Although these nutrients are good for growth, too many and they provide a detrimental effect on algae and plants.

However a study found that recreational craft contributed just 0.017% of the land-based nitrogen total and 0.05% of the land based phosphorous total. Small amounts that have little impact out to sea, but more likely to have an impact closer to the coast.

Should sailors be using this holding tank?

Of course emptying sewage in places where swimming, fishing or water sports are popular, or even when you are moored next to another boat could be considered anti-social.

The more you study this, the more you notice that the emphasis is on how close a ship is to the coastline. If you are out to sea things don’t seem to matter as much. Is now the time sailors should stop treating the ocean as a dumping ground and consider the organisms under the water?

The Problems from Grey Water

The waste water from sinks and showers is known as grey water and has been tested and deemed to have negligible environmental impact. Toilet and sink cleaning products have been tested on marine algae and found to be safe to use, although there are many chemicals that should be avoided if possible, including phosphates, chlorine, and formaldehyde.

The size of the sea is only fully appreciated once you have made your first sea voyage such as sailing to the Mediterranean, or crossing the Atlantic. So a sink of dirty water will always seem like a drop in the ocean. But if your ship has a holding tank, and the planet is something we all need to keep healthy, is it our duty as seafarers to keep it as clean as possible?

You, the Law and Best Practice

The regulations on black and grey water vary depending upon where you are. Sea toilets cannot be used in marinas, but small vessels with less than 15 passengers are allowed to empty at sea without any regulations applying. There are no regulations preventing the discharging of grey water.

If you have a holding tank, it makes sense to use it. Having all of your black and grey water going into your holding tank is the simplest and most straightforward solution.

If you have to empty black water into the sea, make sure you are more than three miles away from the shore. This will ensure that waste is quickly diluted by wave and tide action. Avoid using chemical-based cleaning products in your toilet, sinks, or shower, don’t flush cooking oil or food waste, and make sure to empty your chemical toilet onshore using the correct facilities.

But there is a lot to be said for getting into the habit of using one, especially if you intend to sail far and wide. Once you are in the Mediterranean sea a holding tank is compulsory so why not extend that attitude to the whole of the ocean.

What do you think is best for the sea? Should holding tanks be compulsory? Or should the system stay the same? Join the debate!