Challenger 1 took part as part of there Rolex Fastnet training.  Here’s how it went –

An early start to the Round the Island Race!

Well, no-one told me when I signed up for this that I would have to get up just after I had gone to sleep and be on the boat by 3:30am! Yet when we all started arriving there was a buzz of excitement. Today was the Round the Island race, and today we were going to put into practice all of the skills and teamwork that we had built over the last race and training weekend. This time we were competing, and this time we were going to be the first Challenger across the line.

We slipped lines and headed out from Portsmouth in the dark to the start.  Our start time was 06.30 so we motored over towards Cowes enjoying bacon and sausage sandwiches, the first of many, were prepared and consumed on the way. It was quiet on the way out of Portsmouth, and then as we neared Cowes, we saw them. Hundreds and hundreds of boats, and more coming. Suddenly we were surrounded, and on the lookout, Adam with the roving fender ready to protect the boat to the next potential bump point as fast as he could.  Luckily, and somewhat surprisingly, there were no incidents. The ten minute race countdown began, the five minute, the one minute, the anticipation was rising in the team even if there was very little wind, the ten second countdown and then the gun. We were off. 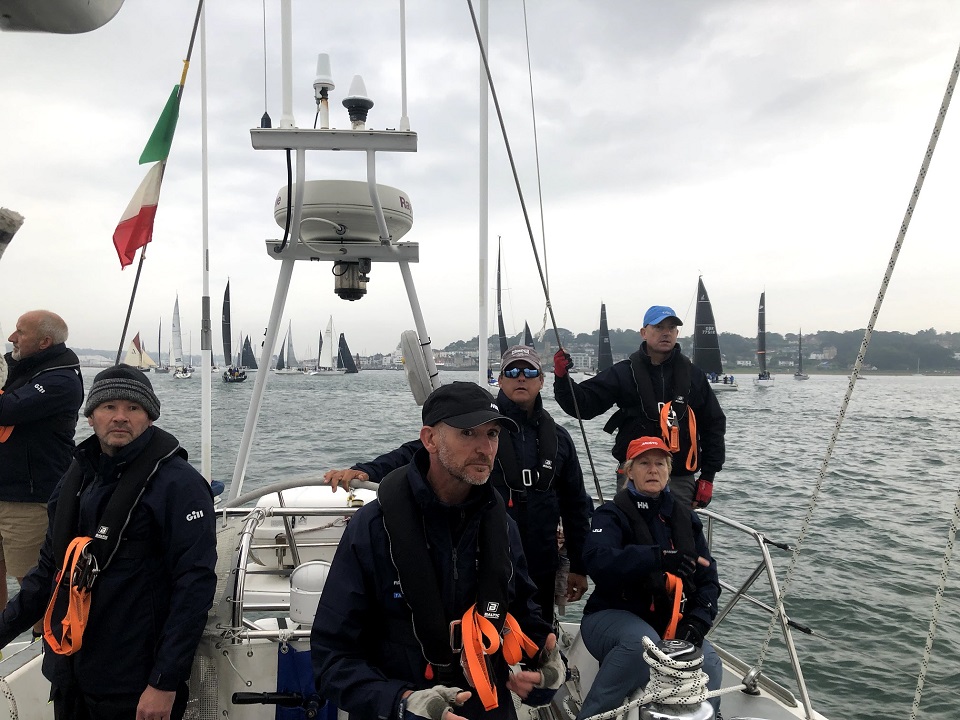 Round the Island Race 2021 start line

No wind. Light airs was possibly an overstatement but the 2kts of tide, which really was the only element carrying the boats over the line started us off on our adventure.  This was going to be a long day!  Slowly the wind started to fill in after an hour or so, filling in to a stronger and stronger steady breeze as we sailed up the Solent towards Hurst castle the Solent narrowing on our way to the Needles. The racing was exhilarating as we approached this narrowing channel with increasing numbers of yachts surrounding us each tacking in quick succession within meters of each other. The Team focussed really hard, trying their best to be as quick, slick and as efficient as possible with each tack, we really had the bit between our teeth totally focussing on our own individual tasks as well as those of others, ready to help each other as necessary and helping to keep a lookout and assist our Skipper Mike as much as we could. It started to rain as our Challenger heeled over hard but no one really minded we were having real fun. Our Skipper, Mike, First Mate Mike and Watch Leaders Mark and Rob (Bex was stuck in Jersey) kept us moving fast and focussing. Everyone working really hard and now everything was going like clockwork.  Captain Mike was impressed, we could tell. 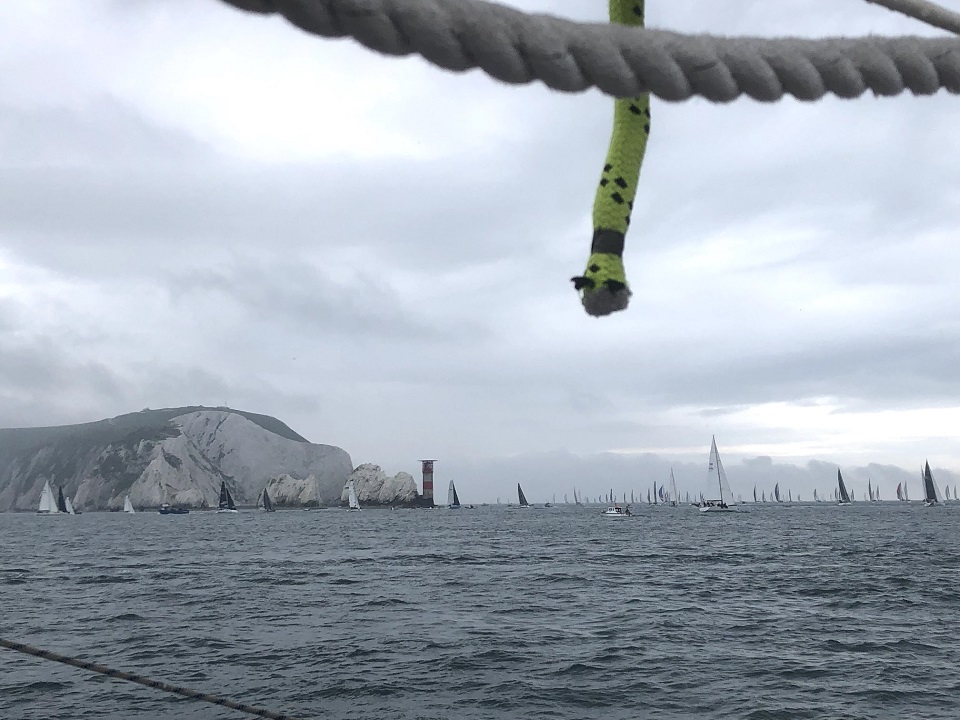 By the time we got to the Needles the breeze was really picking up, and we rounded this iconic beautiful landmark on a port tack at a safe distance. All the other yachts were moving faster now and we could see many boats behind and in front. 35 miles to go, the other Challengers behind us.

Some of the other yachts put their spinnakers up as soon as they rounded the Needles, but we reached across to St Catherine’s point with the Yankee and Staysail full making good way.  Time for another bacon sandwich and the biscuits came out, we are a hungry lot.  Just before we reached St Catherine’s point we saw the perils of taking a risk in the inshore passage towards the shore, a yacht had ran aground close to the shore and was now surrounded by a supportive gamut of onlookers in ribs, awaiting a tow from the RNLI. 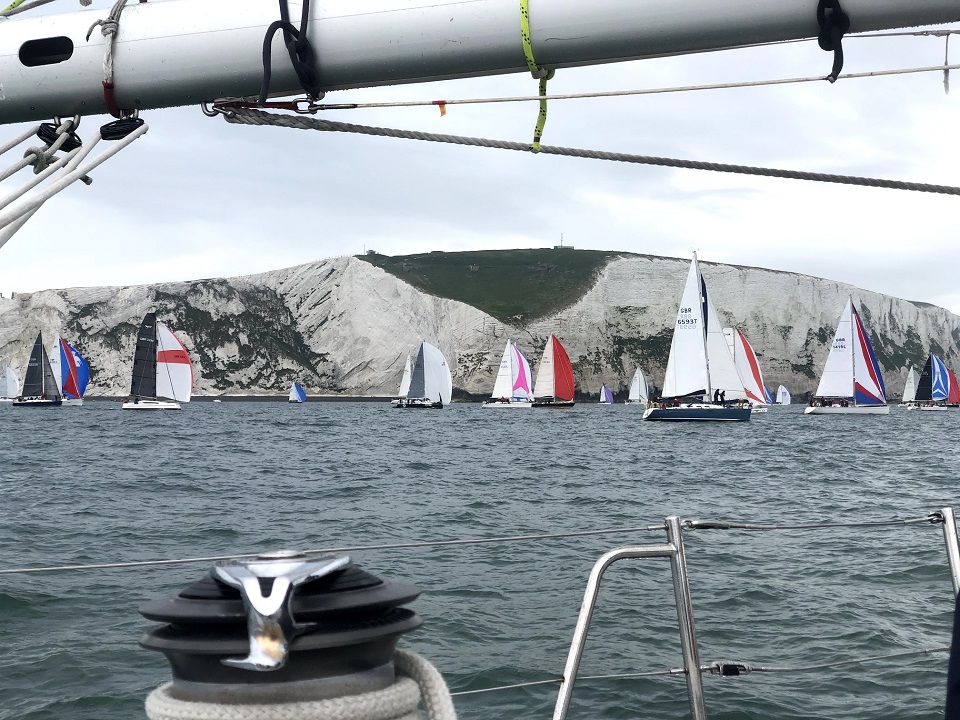 Sailing round the back of the Isle of Wight

As we rounded St Catherine’s point it was time for us to put up our spinnaker for our downwind run. A Clipper yacht was gaining ground on us so Skipper decided it was time to raise the spinnaker. The team having never done this before were taken through each step by Mike, Mike, Mark and Rob. The instructions were excellently clear as we raised the spinnaker pole and then the huge blue and yellow striped Kite. It was wonderful to see the kite fill as the wind took hold. We were all excited and as we took a look behind us, in front of us and close by we could see miles of colourful beautiful Spinnakers being flown from the myriad of yachts in the race. It really is a staggering sight. 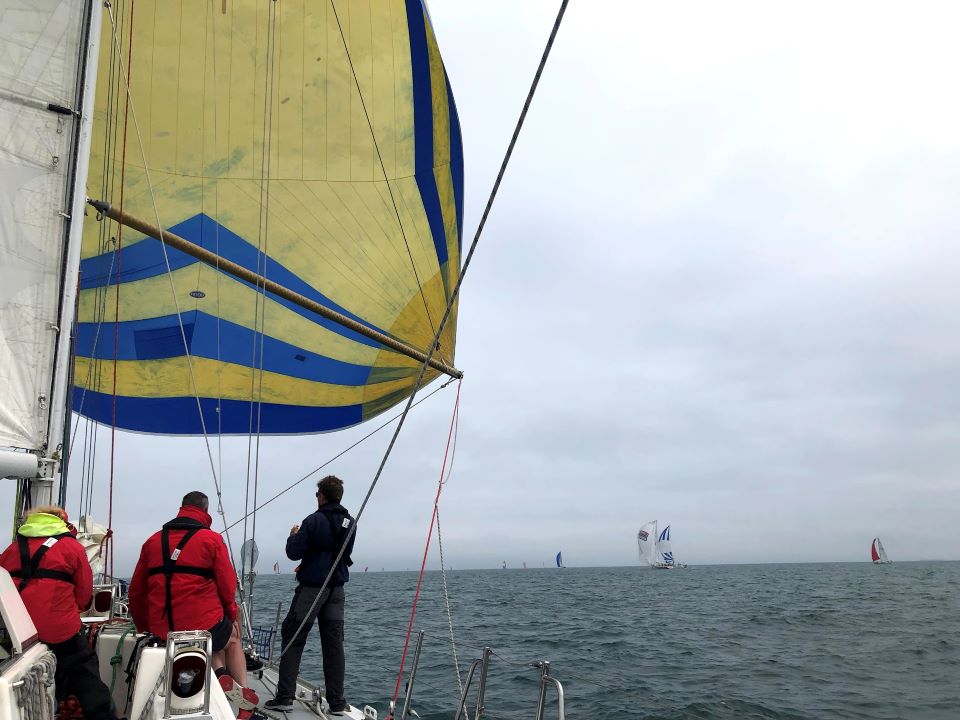 After a few miles we reached Bembridge on the east corner of the Isle of Wight. With the wind steady and rather than performing a complex gybe manoeuvre with the spinnaker we watched in awe as Rob one of our watch leaders made his way climbing along the sheet to the end of the pole to spike it to allow the spinnaker to be free and in a smooth operation we all grabbed at the spinnaker and pushed it down into the companionway towards Austin in the cabin below. We watched a Clipper boat close by try to gybe which didn’t go altogether very well as it flew uncontrollably amidst the loud shouts of the crew. We were glad that wasn’t us as we pulled away from them at Bembridge towards the forts.  Rounding the mark within the calamity of other keen racers we reached onwards passing close by a huge blue super yacht with a large sailing yacht and large motor boat placed on board (this seemed a bit excessive to us but hey billionaires can do what they like) we hardened up and sailed in the steady breeze towards the forts and then onwards towards Cowes and the finish line. 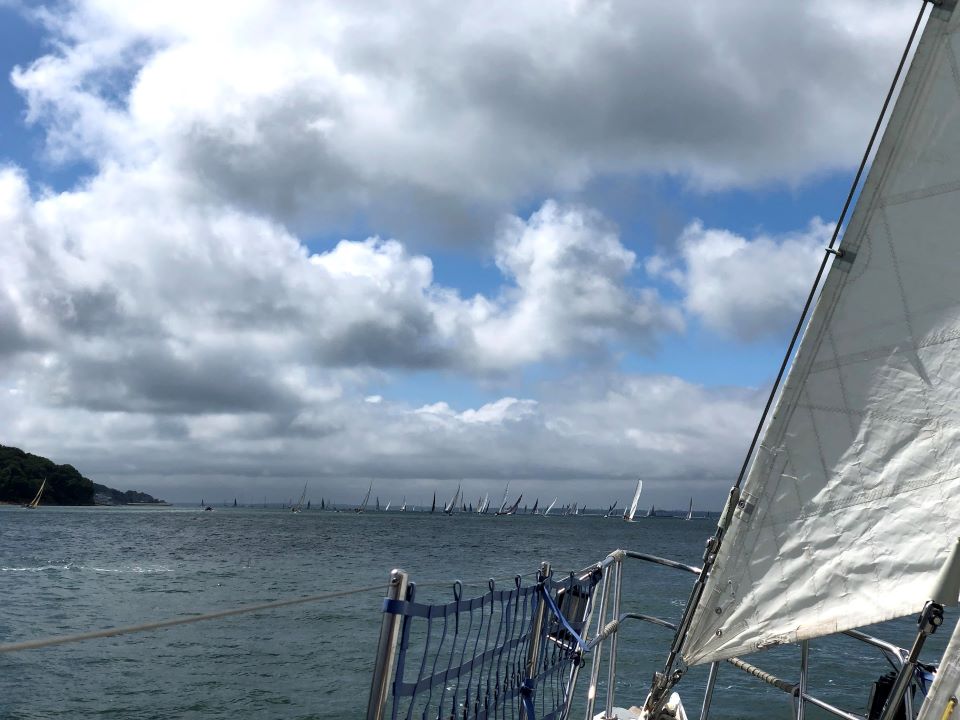 The finish line up ahead

Now, even more so, we felt like we were in a race. Coming along the outside of the pack that had taken the inner path between the fort and the island, we had a strong breeze and despite the tide being against us were making around 8knts under full sail.  It was touch and go as to whether we would need to tack in order to get a line to the finish, and with Guy at the helm we pinched in as close as we could, maintaining the best course to windward and keeping the power on.  We were passing smaller boats, and leaving behind our competition, the other Challengers and Clippers, clearly the outside track was a good strategic move and our sailing was top notch. We were all very happy and keen to do better and better.

After great sailing by Guy, Dean then took the helm clearly becoming ‘Man of the Match’ (ps England vs Ukraine 4-0 – what more can we say!) to power us towards the finish line, Skipper Mike keeping us on our toes with numerous tweaks to the sails as we grasped every opportunity to reach the next yacht and the next, many we passed as the little blue ferry of the Race committee came into view, it was clear we were in a good line to make it. Our Challenger heeling hard the breeze filling the sails we all gave a loud cheer as we crossed 174th out of 1168 boats in 8hrs 12 mins (appreciating that starts were staggered) we were all super happy, an excellent time, a fantastic sail and terrifically great fun. We had all done really well and Skipper Mike was chuffed to bits.

For details of future Round the Island races and how you can take part have a look here:  www.firstclasssailing.com/round-the-island-race-2021

The race is organised by the Island Sailing Club.