Should The Ocean Waste Standards Of MARPOL Be Applied On Land? 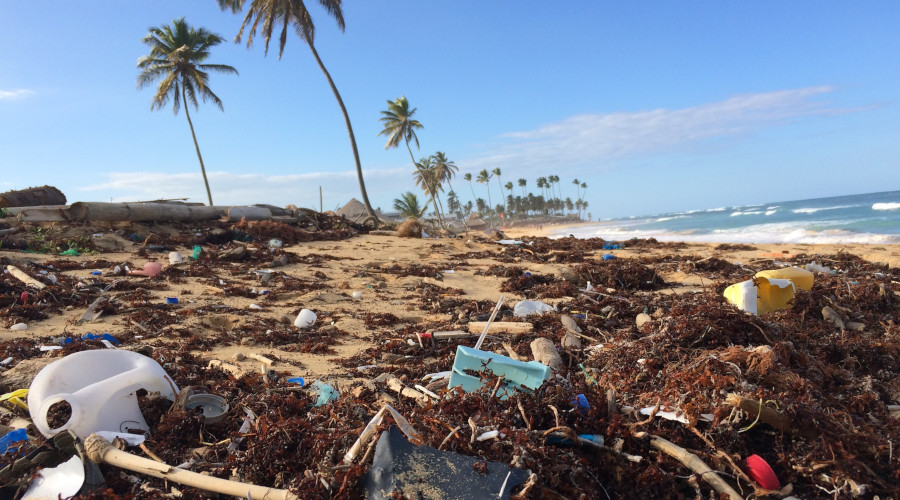 If you visited Southampton Boat Show you couldn’t miss the variety of projects designed to help clean up the sea.

From Sunseeker’s initiative with the Blue Marine Foundation in Menorca to the Boat Show’s sponsor theyachtmarket.com launching Ocean Savior which aims to clear 5 tonnes of plastic from the sea each day.

Why has the marine community acted so positively to the #seaplastic campaign?

Is it because they are witnessing the problem first hand and David Attenborough’s Blue Planet was a catalyst, or could MARPOL, the rules and regulations they work under be a driving factor?

This leads to another important question, why aren’t there regulations on land that match the strictness of those on water?

For example, if you were to spill oil at sea you would be in serious trouble. Should you do the same from your car on a motorway there would be no consequences.

This blog puts forward the case for bringing regulations like MARPOL (the International Convention for the Prevention of Pollution from Ships) onto the land. It has been written in conjunction with Crowdleaf.org.uk, an online forum for news about green, sustainability, and conservation-based issues.

It’s a fact: the majority of plastic pollution in our oceans and seas comes from the land.

This doesn’t mean that ocean dwellers are pointing the finger of blame at their land-lubbing cousins, because this would be a slight own-goal as the statistics show this land-based waste comes from coastal communities.

In fact, the stats suggest that we’re good citizens of the world when we get out to sea, but when we get back on dry land we’re clumsy in our waste management.

The infographic below shows plastic waste from land is 80% of the total, the remainder comes from mariners.

Of this remaining 20%, two-thirds is caused by fishing, the rest shipping. Where does it go? The ocean floor.

94% of our plastic waste sinks to Davey Jones’ locker. 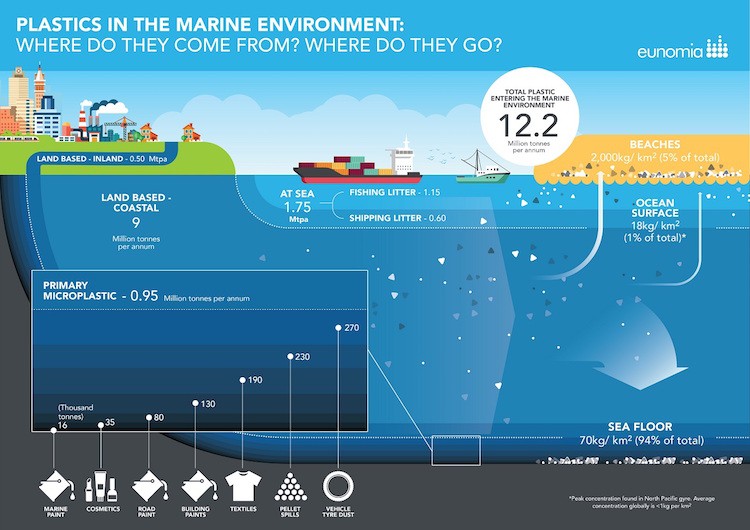 MARPOL is short for Marine Pollution and is the shortened term for the International Convention for the Prevention of Pollution from Ships, 1973 as modifed by the Protocol of 1978).  It was developed by the International Maritime Organisation (IMO) in an effort to minimise pollution of the oceans and seas.  As at the start of 2018 156 states are parties to the Convention, representing 99.42% of the world’s shipping tonnage.  So almost any ship that goes to see adheres to the the Convention.  And any ship that doesn’t that is flagged to a non signatory state would have to adhere to the Convention should it visit a country that is a signatory.

MARPOL is divided into 6 Annexes, each one dealing with the regulation of a particular group of pollutant.


How Strong and Effective are the Marine Regulations?

A good example of MARPOL improving the environment would be the action taken on anti-fouling.

In November 1999 a resolution called for a global prohibition on the application of organotin compounds which act as biocides in anti-fouling systems, it became legally binding on January 2008.

In layman’s terms the paints used on the hulls of boats, that keep them clean, were seriously affecting marine life by leeching out into the seas they sailed on. Ships of above 400 gross tonnage now need to have a certificate of inspection before they first sail, or proof of when their hulls have been re-coated to ensure they match the regulations and avoid the organotin compounds.

Keeping the hulls clean is also important for the environment as it reduces the transfer of invasive aquatic species, plus less fuel will be used propelling craft through the water. According to this article, better anti-fouling has saved 400 million tonnes of CO2 emissions entering the atmosphere. (see:  Best fouling control coatings technology)

When it comes to #seaplastic and waste in the ocean the maritime guidelines have a very important Annexe that sailors must adhere to:

Annex V Prevention of Pollution by Garbage from Ships (entered into force 31 December 1988)
This annex deals with different types of garbage and specifies the distances from land and the manner in which they may be disposed of; the most important feature of the Annex is the complete ban imposed on the disposal into the sea of all forms of plastics.

With guidelines as strict as these it makes you ponder: if they were transposed to the mainland, would they encourage more people to appreciate their role in saving the oceans and also their land-based environments, thereby decreasing the pile of plastic pollution we’re creating?

Why is MARPOL a World Leader?

From an environmental standpoint regulation at sea can be seen as a global leader.

MARPOL has been hugely successful since its inception in 1973. MARPOL is a consensus built minimum standard, for example in tackling oil spills and enhancing ship waste standards.

With joint declarations such as the IMO 2020 regulations that are pushing through lower sulphur emissions, which is vital for areas such as Southampton and Portsmouth. Pollution in this region is as high as London and ship movements play a large part in the cause of poor air quality. 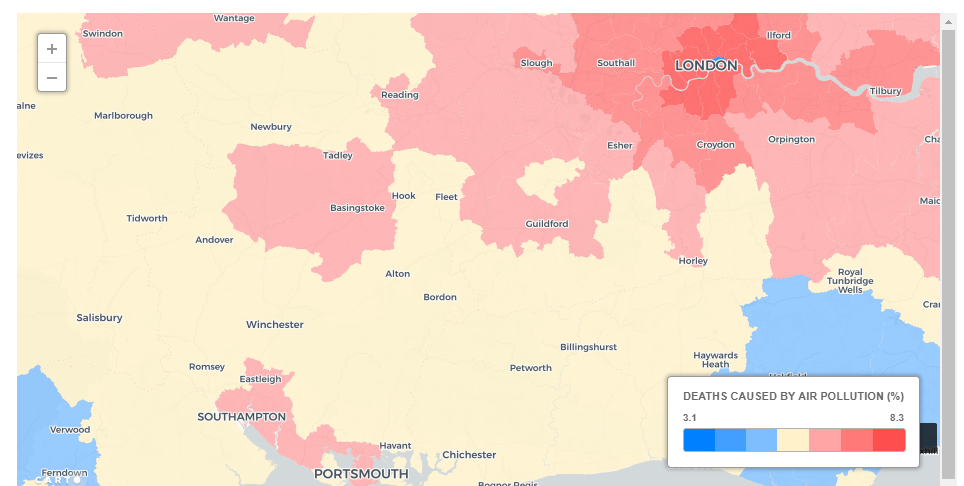 The MARPOL conventions have succeeded through stakeholder buy-in which is key to environmental success because it takes people with it. For example, on ships liability, there is a strict liability placed upon the shipowner regardless of fault, which though limited, can be huge.

Other highlights include compulsory insurance, or international funds, collected directly from the industry that benefits from the passage or importing of oil through ports and/or member states.

This provides a good model for dealing with and dissuading spills and wrecks. Obviously, accidents do happen, but it could work well if enforced on land.

The tools and legal levers are present, what is missing is the framework and will for change.

As we all know consensus builds through give and take. The direction MARPOL is taking is promising, there just needs to be more people fanning the flames of hope and action.

Environmental organisations and forums like Crowdleaf would obviously expect and push for a standard that is higher than the current consensus; though it is always welcome when there is any movement on lowering emissions, or tackling pollution or stemming the tide of waste.

For tackling pollution at sea in the UK the Marine Safety Act and the Merchant Shipping Act provides a structure and regulatory framework.

This works in conjunction with the relevant IMO (International Maritime Organisation) conventions that cover both wreck removal and oil pollution and provide commonality around the world.

The conventions (minus the HNS – Hazardous and Noxious Substances – convention) are adopted and transposed into UK law.

Moving This Standard of Regulation To The Land

The approach mentioned above should be considered for emissions and waste on land, with strict liability applying to the polluter while using insurance to get the environment back into its original state.

There could also be a supplementary fund made up from an industry fed pot, these pots could be used to monitor and run projects for the environment.

Also, strengthening rules on environmental damage with regard to paying for that damage, not on the perceived damage and some nominal one-off figure, but the actual cost to restore species and their habitats back to the level they were.

The ability to fine can be carried out by the legal system if there was ever proven intent or neglect to levy fines for betterment.

For land and marine regulation, there are EU Environmental Directives which place an emphasis on environmental protection.

These have been used in legal proceedings brought against the UK government over air pollution levels, which breach both EU and World Health Organisation limits.

This Is a Massive Micro (Plastics) Problem

The threat of having to pay for the clean-up might help solve the problem of nurdles.

The scale of this problem can be found on beaches around the world, even close to us in Southampton there are acres of nurdles being washed up on the shore as this photograph from a recent beach clean-up demonstrates. 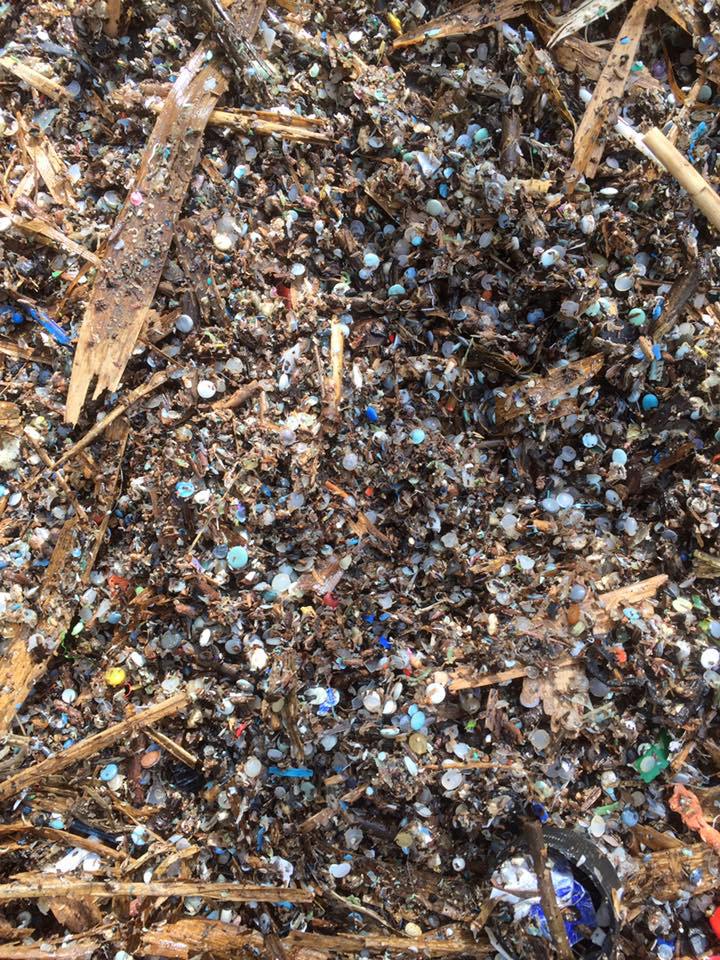 These tiny particles are a massive problem and stem from manufacturing waste that is either discarded or accidentally washed into the sea through flooding and accidents.

Then there are the microfibres presents in everyday items such as clothing that enter the water chain via washing.

Almost all of it (94%) is resting on the seabed and as all plastic that has ever been created is still in the environment there is not only a need to drastically reduce production but also establish a solution to removing it from the food/water chain.

Sailors are part of the natural bridge between land and sea. Maybe it is up to our community to help build consensus by supporting the organisations who are looking to change our habits on waste.

Building A Legal Barrier Between Land Pollution and the Sea

Directives and domestic laws need to and should provide teeth to pollution response which is often lacking. Worldwide there are over 6.76 billion people living in areas that breach World Health Organisation recommended limits on air pollution.

On land, it is suggested companies that profit from polluting processes should pay into a fund to restore the environment and go beyond marine regulations with projects that enhance biodiversity. This could be done through the greater use of the Social Value Act in the UK.

Globally more than at any time before there needs to be a new consensus built, though the world seems a long way away from a consensus that goes beyond the Paris Agreement.

The marine community should rightly congratulate itself on leading the world on environmental protection but what is clearly need is world leaders who are enlightened in this area, leaders who can drive the collective mind and will of the world away from national and industry interests to waking up to the very real threat of climate change and global warming, pollution in the air, land and water.