Challenge of the Channel Islands

Clive Loughlin invites you to look over his shoulder as he plans a 7-day cruise to the Channel Islands.

I am planning a 7-day cruise to the Channel Islands that I will be skippering for the sailing school – First Class Sailing, where I teach.

The Almanac provides everything I need in terms of tide tables and tidal streams.  My starting point for passage planning is to make enough copies of all relevant hour-by–hour tidal stream chartlets so I can have a set marked up for every hour of every day.  I would encourage you to do the same. 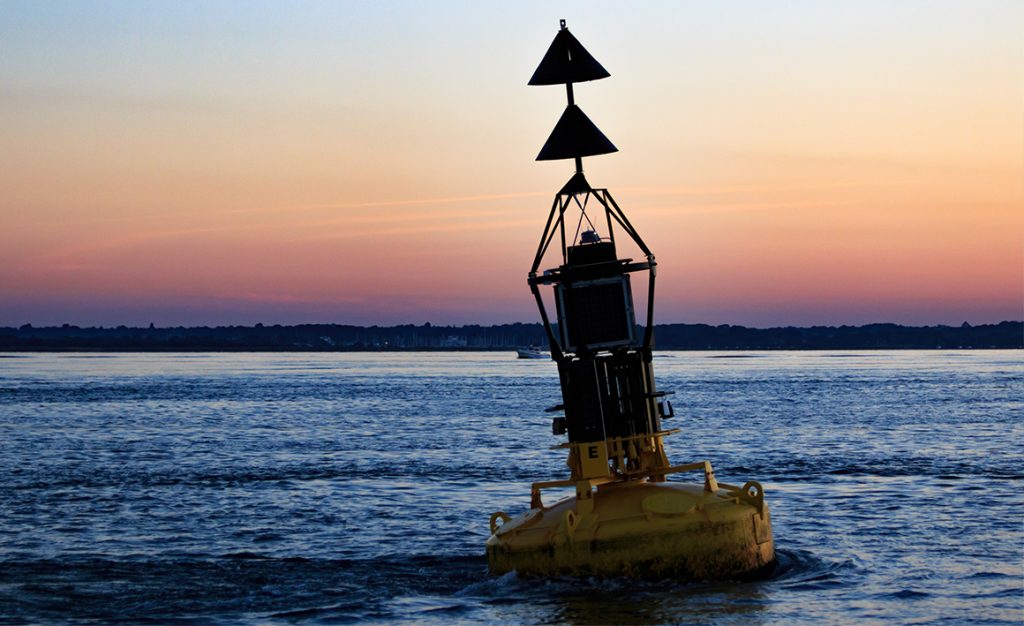 The First and the Last

For any passage plan I like to look at the start and the end first, and then fill in the details in between.   The planning process will automatically include consideration of alternatives that could well prove useful if the main plan needs to be modified for any reason.  Never stick to a plan that has become a bad idea.

For the trip as a whole, I know the earliest I can realistically leave is about midday on the Monday.  I also know I need to get the boat back to our base at Shamrock Quay Marina in Southampton for about 1400 the following Sunday.

I have no idea what the weather will be doing and so the best I can assume is F4-5 from the SW, as these are the prevailing conditions.

On the Monday HW Portsmouth is at 1309 (I use BST throughout) and the stream in the Solent starts flowing west about an hour and a half earlier and keeps heading west until about 1730.  This gives me a window of six hours, which is plenty to get me to Yarmouth (18nm), or even Poole (34nm).

I now quickly check my options for the following Sunday.  I would like to be in the Solent on Sunday morning so that I can be as certain as I can be of being able to get the boat back to base for 1400.

I could either be in Yarmouth at the west end of the Solent, or Portsmouth to the east for the Saturday evening.  On the Sunday the tidal streams are heading east in the Solent from 0930 till 1530, and so Yarmouth is favourite.

I don’t like to push a new crew and a new boat too hard on the first day and would not be at all keen on heading straight out to sail across the Channel.

We could either stay in Yarmouth on the Monday evening or get across to Poole.  Checking the tidal streams in the Solent for Tuesday morning they remain heading east until about 1200 which is far from ideal.  However if I was in Poole for Monday evening I can choose to leave whenever I like and will also be about 10nm further west at the start, which gives me a better chance of being able to sail straight across in the assumed SW winds.

The Needles Channel can be ferocious in strong wind-against-tide conditions and I therefore want to do it either at slack water, or with the last of the ebb to help me on my way.  This means heading out past Hurst Point at about 1700.

I would hope to be arriving at Poole harbour entrance at 1930.  This will give us a brisk flood tide into Poole harbour, or if we are feeling romantic we can drop the hook in Studland Bay and settle down for the evening with a grand view of Old Harry rocks.

Tuesday – Where to go?

Our mission for the Tuesday is to get across the Channel and the nearest destinations are Cherbourg, or Alderney.  I really like Alderney and have visited it many times, but I am afraid I have never found Braye Harbour to be a comfortable destination for an overnight stay, and arrival needs to be carefully timed to coincide with a very brief period of slack water.

I am also more likely to be able to sail directly to Cherbourg, which is 25nm further east – so I will opt for Cherbourg.

Crossing the Channel is a pretty straightforward navigational exercise.

It is almost exactly 60nm from Old Harry rocks to Cherbourg.  If we assume 6 knots the passage will take 10 hours and if I set off from Old Harry at 0700 I should arrive in Cherbourg at 1700.

What I want is a single heading that can be maintained for the whole of the crossing.  This is preferable to trying to sail along a straight-line course over the ground which would add about 25% to the distance and time sailed.  With a constant heading the boat is pushed east and west by the tide to create an ‘S’ shaped course over the ground.

I mark up the tidal stream chartlets for the Channel and see that the tide will first push me east by 11.5nm before turning at 1300 to then take me west by 11.7nm.  These effectively cancel each other out and so I can ignore the tides when coming up with a course to steer (CTS).  However if the journey takes longer, say 12 hours at 5 knots, I am likely to be pushed further west by what could be as much as 8nm.

There is nothing worse than hitting landfall down-tide of your intended destination and then having a painfully slow slog against the tide at the end of what is already a long day.  So in working up a CTS I aim to hit France 8nm east of Cherbourg and get a CTS of 161T.  Magnetic Variation for this area in 2020 is only about 0.5° west and can therefore be ignored, so I just need to check my deviation for this heading, allow say 5° for leeway (166T) and go for it.

The heading of 166T is handy from a sailing point of view given the assumed SW winds, and means we are crossing the shipping lanes at almost exactly 90° – just as we should.

Although I have visited the Channel Islands many times I have never made it as far south as Jersey, and getting there was one of my motivations for suggesting a 7-day as opposed to the more common 5-day trip.

In the morning the main tidal stream heads east in the Channel until slack water at 1400.   This is a bit late for us to set off on a long passage, but fortunately there are back eddies flowing west from Cherbourg towards the Cap de la Hague (15nm) that start around 1000.

The Alderney Race has a fearsome reputation and needs to be treated with respect.  My choice would be to enter the Race at slack water or while the tidal stream is still heading north.  The ‘switch’ from north to south-going tidal stream happens quite quickly, but if I can enter the Race at about 1330 I should be fine.  Once through the Race I can then comfortably head south for Jersey and get the benefit of a progressively increasing tidal stream.

Cap de la Hague to St Helier is 35nm, and assuming we manage 7kn over the ground (6kn boat speed and at least 1kn of tide), the passage should take 5 hours and have us approaching St Helier from the west and docking at 1830 or soon after.   St Helier Marina has access HW± 3, but I would hope to be able to stay overnight on the walk-ashore visitor pontoon and have 24hour access.

So far we will have had three long days of sailing and so it will be a good idea to have a relatively chilled day.  I am also looking ahead to the days remaining – Saturday will see us getting back to the Solent, so that leaves just Thursday and Friday for further exploring the Channel Islands.  Having come down to St Helier it would be rude not to have a look around, but at the same time I really like Sark and its old-worldly charm.  So I am thinking in terms of a breakfast ashore in St Helier before setting off at 1000 to ride the now north-going tidal stream to Sark (20nm).

Depending on the weather we could either anchor in a bay or pick up a visitors yellow mooring buoy in Havre Gosselin on the west or Greve de la Ville on the east.

A day spent on Sark is like going back in time with no motor cars or street lights to threaten its  ‘Dark Sky Island’ status.  At just 2nm in length it can be easily explored on foot and will greatly reward the effort.

I am again looking ahead to decide where we need to be for the evening so that we are well placed for the return to UK waters on the Saturday.  The alternatives are really Guernsey or Alderney, but I think St Peter Port on Guernsey will be most likely to supply a restful evening.  It will mean we will start Saturday 20nm further south than if we had made it to Alderney, which is certainly a consideration, but one I will overrule on this occasion for the added benefits of St Peter Port’s walk-ashore facilities, and will stay outside Victoria Marina on the 24hour access visitor pontoons.

Friday can also be a fairly chilled day.  Sark is only 7nm from Guernsey so we have time to either further explore Sark or to visit Herm, which has no harbour that we can use, but a few anchorages that need to be negotiated with care.  I have yet to land on Herm and so this is another item on my bucket list and it will make a rewarding and challenging pilotage exercise for the crew.

Saturday – return to the Solent

My mission for the day is to end up in the Solent having entered at the Needles end.  The tidal streams into the Solent start heading east at about 2200 and I don’t really want to arrive before then or I will face a slow slog up the Needles Channel in wind-against-tide.  A night-time arrival at the Needles and then onwards to Yarmouth is relatively straightforward and will likely be familiar to some of the crew.  Arriving at the Needles at 2300 gives us 4 hours of night sailing and should see us safely moored up by 0100 on the Sunday morning.

The tidal stream stops flowing strongly south in the Little Russell by 0700 and so we can leave St Peter Port any time after that.  With a SW wind our passage through the Alderney Race with a NE-going tide should not be too exciting, but it will be fast with at least 3knots of tidal stream to help us on our way.  With luck we will have Alderney abeam within 3 hours of leaving St Peter Port.   For those heading north the Almanac recommends passing Banc de la Schôle, which is 10nm from St Peter Port and about half-way to the Alderney race, just as the tide starts to head north (1000).

We will leave Alderney and Braye for another day and carry straight on for our passage to the Needles, and with a SW wind we should have a cracking broad-reach sail. 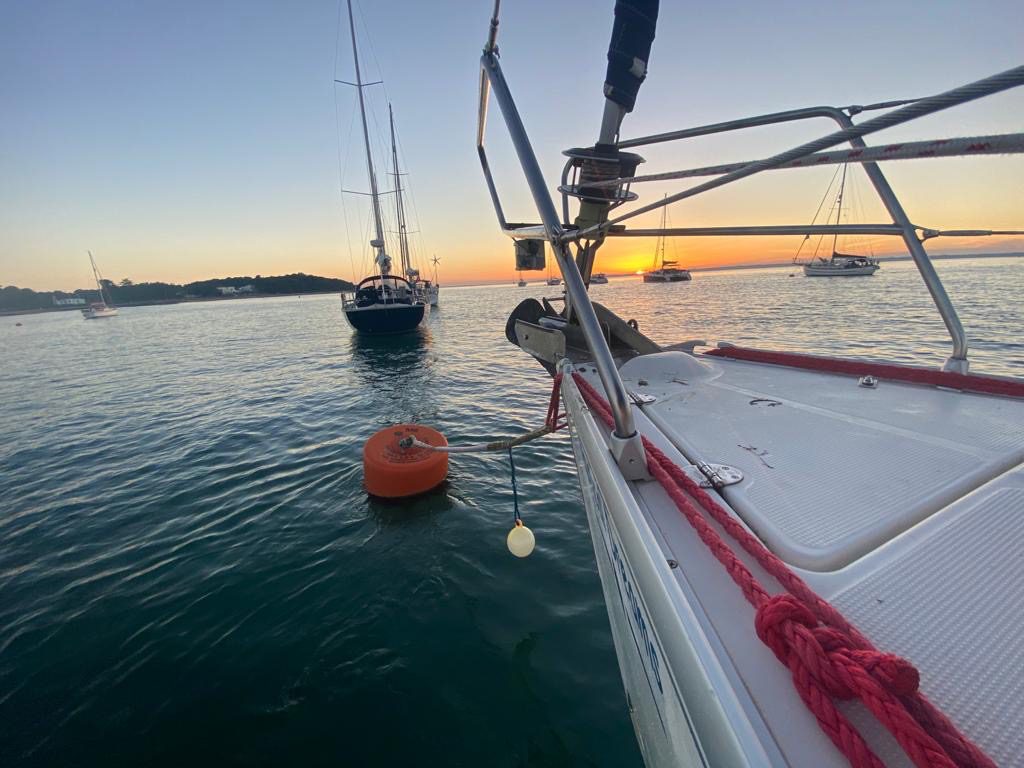 Sunday morning has us waking up in Yarmouth with a passage of 18nm to get us back to base in Shamrock Quay by 1400.  We can fill up with diesel at 1000 and then head out into the Solent with the wind and tide in our favour for a straightforward passage back to base.

A full-on, but highly rewarding week, with 284nm under the keel and a great variety of experience in challenging and beautiful surroundings.  I can’t wait.