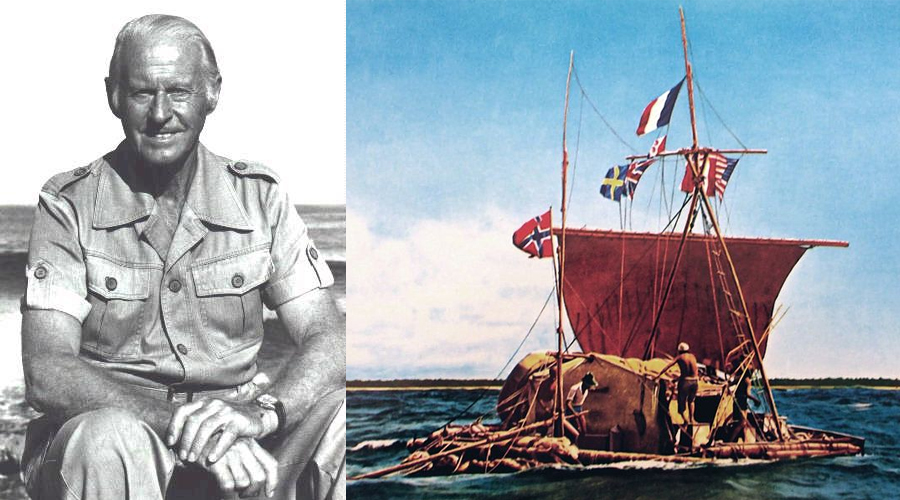 When it comes to epic sailing adventures our thoughts always turn to the Norwegian Thor Heyerdahl, especially as 2017 marks the 70th anniversary of his Kon-Tiki expedition.

On 28th April 1947, Thor and his crew of five left the coast of Peru on a simple raft made of balsa. Their destination was ‘the other side’ of the Pacific Ocean and their driving force was Thor’s belief that ancient races knew how to sail the oceans.

The voyage’s success was a worldwide event and made Thor Heyerdahl a household name. Even now it seems quite remarkable that they survived and at times they thought they wouldn’t but it didn’t stop his desire to prove that the ancient mariner is a lot older than we think.

This video will give you a great insight into Thor’s legacy and how people want to emulate his success.

Crossing the Atlantic in a Boat of Papyrus

Every year we enter a crew into the ARC Rally and the yachts they sail in are mighty fine ships. Imagine making that crossing of the Atlantic in a boat made of Papyrus? Thor and his crew did that just that.

They made the voyage twice as the first wasn’t successful. Thor wanted to prove that Africa and South America had been visited in the past by such boats as the designs in each country were very similar.

However, his first attempt failed due to the ocean movement breaking apart his vessel. The amazing part of this story is that the solution was found in the hieroglyphics of the Egyptian pyramids. On their drawings of the ships, there was a string that connects both stern and bow to the mast.

By using this design Ra II successfully sailed to Barbados in 1970. In 1978 he was at it again with Tigris, another reed boat but this time the voyage was to prove a nautical link between Mesopotamia and the Indus Valley Civilization (Pakistan/ western India).

The more you read about him the more you love his spirit of adventure and how he not only cared for the planet but was willing to speak out and make his feelings felt.

With Tigris, for example, they burnt the boat as a protest against war. During the Ra voyages, they collected samples to show marine pollution was a problem.

His legacy lives on in the Thor Heyerdahl Institute which was established in 2000 and is located in Heyerdahl’s birth town of Larvik, Norway. The Kon-Tiki Museum houses vessels and maps from the Kon-Tiki expedition, as well as a library with about 8000 books. That can be found in Oslo, Norway.

If you want to have a Norwegian sailing adventure of your own to Norway, and maybe soak up some of that Heyerdahl inspiration visit this Norway Sailing page

If you want to take on the Atlantic then there are three voyages available here.