Atlantic Rollers and The Many Ways to Describe Them 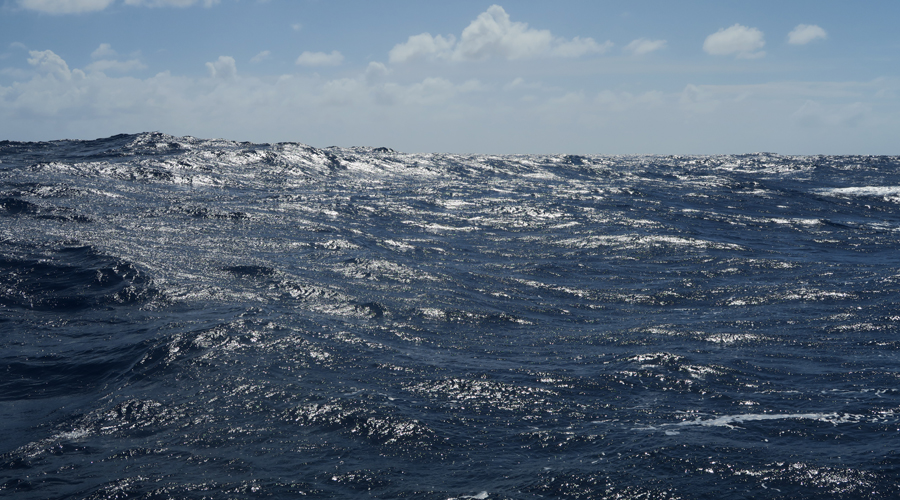 As usual the FCS crew have provided us with a variety of interesting posts, with almost all of them having a go at describing Atlantic rollers – those friendly giant waves that… well, we’ll let them put pictures into your mind’s eye. First up is the midday report from Nick the Mate, who also adds a little more in a blog…

We are currently travelling NE at approximately 7knts under engine. The wind has as predicted dropped to almost nothing, the current GRIB file shows a band of high pressure stretching over the next few days for close to 1,00nm. We are in the middle of an enormous wind hole.

We have discussed various strategies to try and escape the high but have come to the conclusion motoring for the next few days is our only realistic option. Hopefully there will be a change in the pattern and we can get some wind for the last part of the journey.

Despite the sea being calm there is a large rolling swell that is producing a very sloppy motion, we have therefore reefed the main sail down to reef 3 to give us some stability and to stop the sail from flogging. The crew are settling back into the old routine: eat, sleep, sail, repeat.

Cooking is getting competitive again with chocolate crispy cakes being the latest offering from my watch. Today is quite cloudy although the night watches are a little clearer, there is a half-moon that is bright enough to illuminate the very glassy 5 meter rollers that hypnotically rock the boat on the beam.

More Thoughts About Rollers and Cooking

The lights of the last Azorian Island have faded into the distance as have the memories of nights of gin and song in Peters bar. The reality of leg 2 was felt on the first night, thermals, gloves, hats and boots have started to make an appearance. The hot and sticky tropical Caribbean heat of leg one has given way to cold grey North Atlantic weather.

Weather that has failed to provide the anxiously anticipated wind to hurtle us up to Falmouth at 15knts. The wind has dropped to between 3 to 10knts leaving us no option but to motor, my least favourite way of traveling at sea. Despite the lack of wind there is a long slow Atlantic swell that rolls powerfully but gracefully towards the beam like a massive grey hill; raising our 57 ton lump of steel up two stories with little or no effort then gently placing her back in a giant trough to await the next wave.

The crew are getting back into our now familiar routine: Eat, Sleep, Sail, and Repeat. The day watches are starting to bring back the competitive cooking streak, with Tony knocking up a batch of chocolate crispy cakes made with the boring cornflakes that we always seem to have on the boat but no one ever uses.

So hopefully this is a sign of things to come. The North Atlantic Bake Off. Cooking again has been superb with Leo our resident Italian watch leader creating an excellent Spag Bol Last night, will Steve’s Chicken Curry reach the same standard?

I have just noticed how simple life at sea becomes with major concerns being based around weather and food. Hopefully we will get good quality and plenty of both.
Lots of love to everyone at home.

Our donkey doesn’t need a vet,
Simply someone with the know how to inspect it and dip it,
Removing and fully inserting the stick,
Our donkey is at times our sanctuary,
When the wind drops our donkey clip clops,
Though we often complain and reluctantly call it into service,
We love our donkey really.

Hey Lesley and everyone else’s loved ones.

Having now being declared the boat chronicler and blogger in residence I was beginning to feel like could start to express a slight dramatic artistic temperament, by getting the rest of the crew to do a bit of running around after me while I let my thoughts and ideas ruminate into the daily blog post.

I thought I’d have tea and biscuits brought to me as I teased the threads of the day into a somewhat coherent narrative, so upon declaring this to Steve our friendly watch leader says to me, tell you what why don’t YOU put the kettle on when you go to do the blog post. I have been firmly put in my place as just a lowly scribe again.

Well we are definitely back out at sea now, I know this because men in waterproof outfits keep waking me up in the middle of the night instead off waking gently when I choose in to nice crisp white sheets on a soft bed, yes I was one of those that slopped off to a hotel while in Horta and I can’t say I felt any guilt as walked from my bed to the shower in my suite.

But back to the sailing trip we are now starting to get some Atlantic rollers, now this isn’t something sweet like arctic roll, or a dodgy band, like the Bay city rollers, or even a modern boat hairstyle from a week of unwashed hair, these are big high, but very wide rolling waves, although we have been told the ones we have come across aren’t the really big ones, they are still impressive, I would say you can see them coming from the horizon when you are on top of one, and when you are in the trough it’s like sitting in a big bowl were all you can see is water around you and the horizon had reduced to the top of the swell, they have impressed everyone, and no more so than when a couple of dolphins popped out of the side of a wave.

Whilst on watches of either 4 or 6 hours as I have expressed before, time dilates according to stimulation and this could be work, music or strange occurrences, well during this leg we have all obviously been busy downloading music to phones from Spotify to play on Steve’s Bluetooth speaker whilst on watch, So far this leg we have had the Beatles, Queen, Hits from 80’s, 00’s, Classic Rock and some Swing Music.

As we progress on a more northerly track the weather is getting colder and consequently more clothes are coming out, gloves, bobble hats, buff’s so while we adjust to the temperature with all the extra layers and thermals we are starting to become a crew of Michelin men.

This has the added benefit of having some extra padding to sit on and less elbows and knees to do damage to each other at watch change, although it has induced a lumbering wobble creating more hugs and bums in faces as we scramble around each other.

Now Tony has obviously been inspired by Alex’s cake baking from the last leg and has found some supply of chocolate in Horta as he has nobly produced Chocolate Cornflake cakes. This amount of chocolate has made Chloe very very happy, although she is still the first to be offering around the biscuit tin at Tea/Coffee break.

As we have very little wind and what we do have we are motoring into, the skipper and mate decided that we should take a reef in the main sail to stop it flapping about, and this was while we had 1/3 of our watch down below cooking dinner, Steven and his able assistant nigella were cooking up a storm, so Nick the Mate went on the wheel and got to work.

Now putting a reef in requires the co-ordination of pulling various bits of string with funny names in exactly the right order. So the Cunningham, Topping Lift, Main Halyard 2 and 3 reefing pennants and main sheet were all pulled in approximately the right order with the skipper coming up once looking around and going “Hrphmy blahby Rar” we took this to be a good sign and declared the job done and the skipper happy.

And we were right, now apparently we did such a good job in the daylight that Captain Underpants (That’s all the skipper was wearing with a t-shirt for modesty when he came up) decided that we had should now put another in another reef but for added difficulty it would be during the night watch 11-3.

For this attempt we had the rest of the watch with us. And once again as he had done such a good job before we allowed the mate Nick to have a little go on the helm while we pulled all the bits of string again. Our attempt was declared “Average”, this being a term of high praise on Challenger 2. We declared ourselves right proud of our efforts and rewarded ourselves with a fun size kit-kat. Soooo much chocolate this leg.

All at sea once again.
Budgie

My new favourite sort of wave

4.28am (GMT-1) and all is indeed very quiet, apart, that is, from the diesel engine humming out it’s tune. I have just about got over the exquisitely painful 2.45am wake-up call, Port Watch’s first since leaving Horta and slowly but surely we are getting back into the sea-going groove.

A new experience for me coming out of Horta was seeing and riding Atlantic rollers. These massive rollers are the size of small hills and at first sight can be a bit alarming as they roll towards you. These ones were probably 5 meters in height and 50meters apart and they effortlessly lifted the boat as they passed under us wending their majestic way to who knows where. Definitely my new favourite sort of wave.

According to the weather forecasts, this calm state looks set to persist and so we might be motoring for a while yet. I can’t say I miss the 35 degree angle, but we are all hoping for a wind to enable us to sail in the not too distant future.
A special thanks to friends at Chichester Cathedral – your messages of support are much appreciated. Lots of love to family and friends and especially to you Sweetie. Howardx

All well. 40 hours out from Horta. At first we sailed east in light northerly wind. Now we have no wind and flat seas. Most unusual. There is a big “high” in the north Atlantic. We are motoring towards Falmouth. Regards. IB