Back on dry land

At the finish line

You will no doubt be glad to hear our intrepid crew have safely made port in St Lucia after an epic trip across the Atlantic. Here at First Class Sailing it has been my honour to post the blog daily and most of the time I have merely posted the thoughts, stories, and experiences back from the team so you get the full experience of the adventure.

I think it would be hard for even the non sailors reading this blog not to been carried along with the stories that have appeared daily. We will, shortly, provide a post with all the best bits from the last three weeks and hopefully some pictures but in the meantime read the last two poignant blogs from Gary and Jim.

If this has inspired you to do something challenging next year then we are already taking bookings for this amazing adventure. You can get more details from our website or complete the form at the end of the blog. 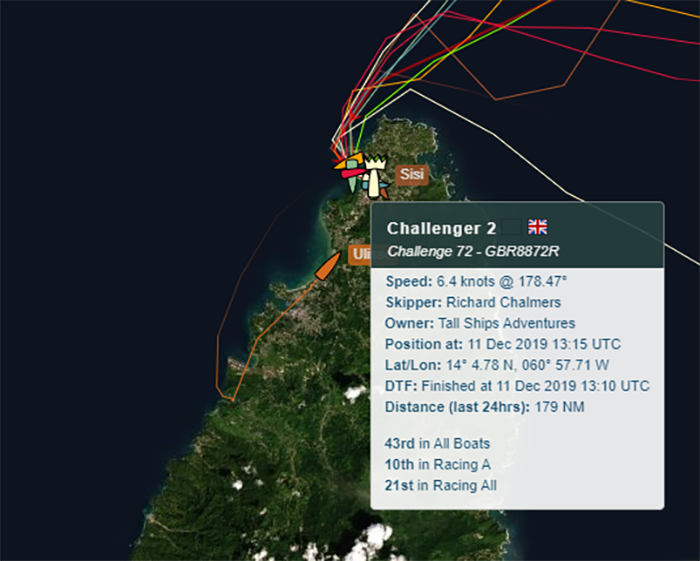 This is it – the final Jimblog. I’m writing it now whilst we are still in our solitary bubble since if I wait until we arrive in St Lucia the spirit of the voyage will have vanished, stealing memories and thoughts along with it. We expect to arrive tomorrow, at around 11.30 UK time and we will then do things we haven’t for seventeen days, such as interacting with other humans and drinking from glasses. In short, we will have worked as a team to sail 3000nm across the Atlantic in a racing yacht, enjoying some pretty spectacular conditions on the way.

Every team needs a leader and ours is Ricky. His calm demeanour has transmitted itself throughout the boat and we appreciate the way he teaches, rather than simply issuing orders. He has the confidence to allow us the privilege of helming this 50 tonne vessel in demanding conditions whilst appearing nonchalant, at least most of the time. Ably assisted by Mate Kirstie, he and the team work extremely hard, whilst allowing us to enjoy ourselves and participate fully in driving the boat. Ricky, Kirstie, Baz and Chris will be allocated a top memory drawer, with a draw liner and perhaps a little pot pourri sachet.

In a special memory store go acts of kindness and going-beyond what’s necessary in order to help, when you don’t really have to. 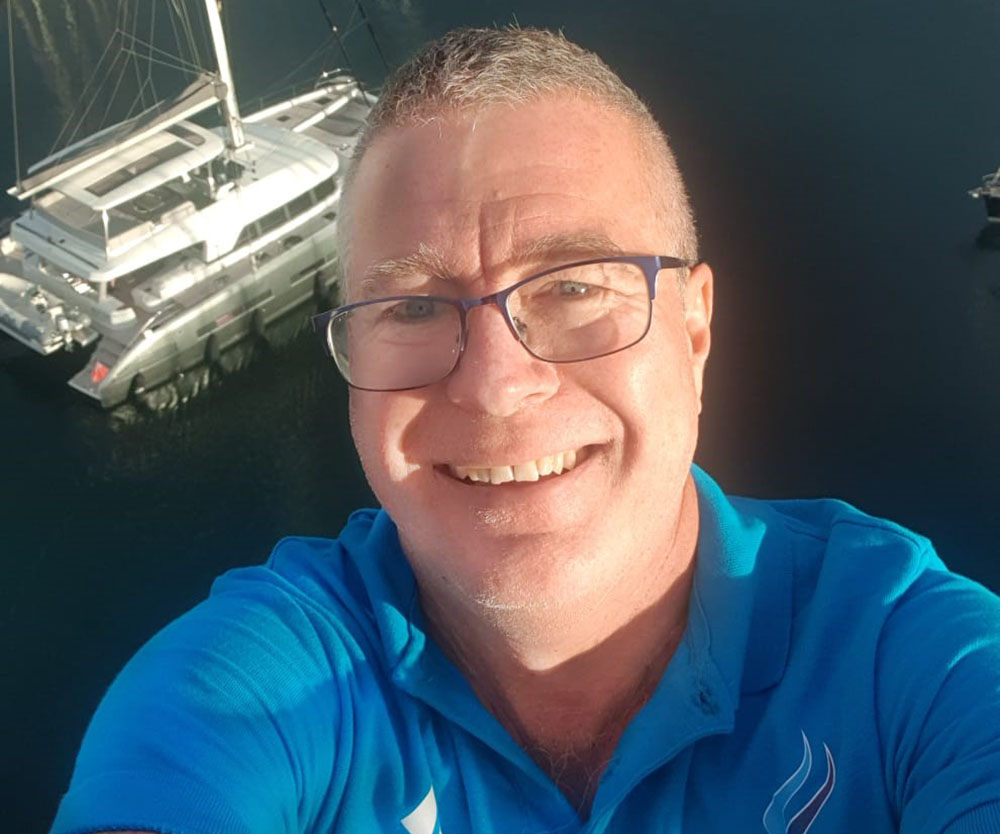 We’ll need big drawers (ooh missus) for the last memories, but they are worth it. The first is of helming Challenger2 in big seas, by both day and night and of the visceral, emotional thrill of looking down the length of the boat as she becomes a wave-borne magic carpet, rising and falling and cavorting in the spray.

In another you will find the endlessly changing vista of sea, sky, moon and stars. Enough said on that one.

Today as the Challenger 2 crossed the finish line I tossed a beat up old ships bell overboard into Rodney Bay. The bell crossed the Atlantic Ocean with us but its journey dates back 12 years and over 6,000 miles further to Santa Barbara, California. In 2006, George, Eric, Mark and I, the four original sailing partners on the Sunbum, had planned a week-long Caribbean sailing vacation. We were to fly down to St Lucia, charter a bareboat 45’ catamaran and sail her down to Grenada.

Unfortunately, shortly after the arrangements had been made, George was diagnosed with advanced bladder cancer. He decided to fight hard rather than head to St Lucia and allow nature to take its course. George, ever the Marine, fought a valiant battle but ultimately succumbed to his disease in September of 2007. Shortly before he passed, he expressed his burial wishes. George wished to be cremated with some of his ashes scattered from the Sunbum just outside the Santa Barbara Harbour with family and friends in attendance. The remainder would be taken by Eric, Mark, and I, to George’s favourite anchorage off Santa Cruz Island.

On the way to the initial ceremony I realised that we did not have a bell aboard the Sunbum to ring the requisite 8 bells, marking the end of George’s watch. I dashed into the West Marine at the harbour and procured said bell. I asked Mark to hold the bell against our port radar pole while I grabbed a screwdriver from the toolbox to attach the bell. When I returned with the screwdriver, Mark was standing next to the pole, but the bell was nowhere in sight. When quizzed, Mark replied, I thought you were holding the bell. I ran back to West Marine and bought a second bell, their last as well, and this time made certain she was not dropped overboard.

After the ceremony, Eric suggested that the diver who regularly cleaned the bottom of the boat and retrieved lost items for us, should grab the bell for us so we could return one of them to West Marine. We decided collectively to leave the bell on the bottom under the Sunbum, in honour of George, as he dropped more stuff overboard than the rest of us combined.

When I started planning my trip across the Atlantic Ocean, I instantly remembered that bell and our 2006 planned trip to St Lucia. We had our diver scour the mud under out boat for many hours till he located the bell under several feet of mud deposited over the 12 intervening years. I had expected the bell to be in multiple pieces and my plan was to give one piece to Carole, his widow, drop one piece off of Santa Cruz Island, and take another piece with me to St Lucia, to honour George. Miraculously, the bell came up in one piece, absent its brass plating, and with a crack that resembled the famed Liberty Bell in Philadelphia. With Carole’s permission, I had the bell engraved from the entire Sunbum crew and her, with plans to have George finally make his trip to St Lucia, even if just in spirit.

Casting that bell overboard was one of the true highlights of my journey.

Love and best wishes to all at home.

You may have missed being on the ARC Rally 2019 this year but if you fancy coming along next year or one of our other offshore sailing trips have a look here voyage across one of the world’s oceans and start speaking to the team in the office. They can assess which Atlantic voyage will be good for you and, if you need it, what course would take you to that level.