There’s been a perceptible change in the mood aboard Challenger 2 today, at least from my perspective and I think it’s shared by others. It seemed that after the half-way party (of which more later) which was excellent and a great release, the atmosphere aboard was somewhat quieter. I guess that’s not really a surprise as sailing the Atlantic is physically challenging and tiring, either being on watch, eating or sleeping and we have had two weeks of it. Today the mood is much more positive and relaxed, mellow even. 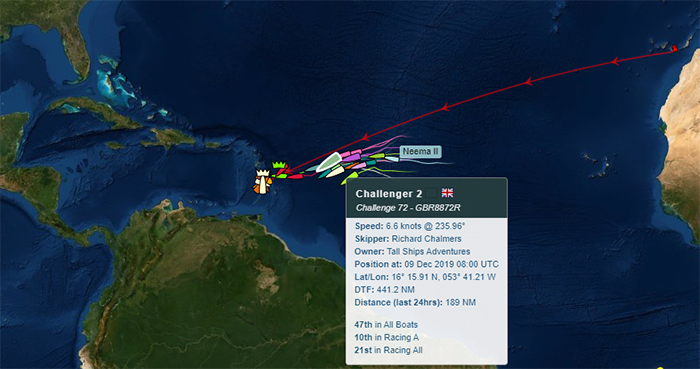 This is probably a result of several things, not least the prospect of arriving in St Lucia in a few days, the increasingly Caribbean-like weather and some absolutely excellent sailing. We are loping along at around ten knots (11MPH), with huge swells queuing up to run in behind us at 30 second intervals. As they do they loom up over the stern of the boat, before lifting it, and pitching the bow down into the wavefront. Challenger 2 then surfs down into the wild foam and spray, before being physically dumped into the wave trough with a loud ‘ooomph’, Finally we are then smoothly whisked upwards by the new wave. The experience from the helm is enthralling, looking down the hull as she rides down into the spray. Better than any fairground ride.

We also had a fantastic overnight watch last night, from 11pm to 3am. Instead of bright warm sunshine illuminating the action, it was lit by beautiful brilliant moonlight. Absolutely hypnotising and when not helming we just sat and stared at the magical moonlit vista. This was made even more pleasant  by the fact we are now working in T-shirts and shorts the whole time and the nights are pleasantly warm.

A flashback to a previous ARC fancy dress party

I suppose mention must be made of the recent half-way party, as photographic evidence exists and will probably come to light. I was the shark, which consisted of a full onesey shark suit and separate head. Very fetching but a slight mistake, given the party took place in hot sunshine. I was made (forced against my will, really), to adopt dubious poses which no self-respecting great white would consent to.

Among the motley turnout were; a Frenchmen, what I believe was an ape crossed with a 70’s DJ, a man-duck (which we suggested throwing in and seeing if he floated, but the skipper forebode it), a pirate with a questionable appendage. Finally, a mermaid whose ‘accessories’ appeared to have been filched from a chip shop and an un-nun like nun who behaved nothing like her fellow sisters that taught me (and also had far less facial hair!)

Anyway, fun was had by all and well supervised by the skipper and mate. Well, no one fell in anyway. I am sure the shark will reappear in the near future, possibly in a drunken incident involving jumping in the sea.

Our ETA is showing as 11.50 your time on 11th December, but that’s a somewhat moveable feast and we’re running a sweepstake. So anyway, all being well I will be in cellphone range soon and intend to call whatever the time of day so be warned!

Sunday 8th Dec – “the sun is shining weather is sweet”

The morning started damp and grey – could have been the North Sea, except for about a 29 degree temp difference.  We bundled up on deck in the dark to start the day.  Sunday sees the clock being changed by a couple of hours so 7 hour watches, but the benefit of sun rise being there at the end of the graveyard watch/start of the morning watch.

The sea was pretty choppy this morning and a huge rolly sea combined with wind changes led to anyone in the galley being flung around at speed.  Thankfully everyone seemed happy enough as we heard screeches of laughter (albeit borderline hysterical).  Not long into the watch and another gybe.  Everyone on watch jumped up and followed commands, keeping us all safe and sound. One of the curver boxes (basically a place where all your worldly goods are stored) made a bid for freedom which resulted in stuff scattered across bunks.  Thankfully I wasn’t sleeping, as one of those being launched would be pretty nasty. 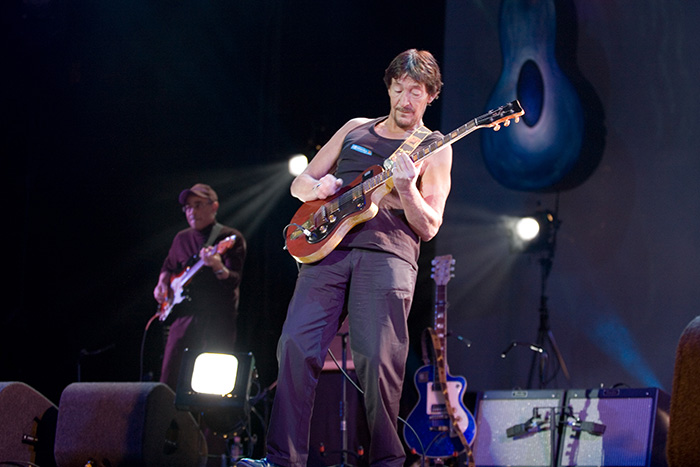 I’ve just come off the helm and one of the mother’s is relaxing with Chris Rea keeping us company, it truly feels like a Sunday.  If I was at home I’d be coming back from training on the Lifeboat, Ken (hubby) may be back from golfing. My beautiful Dog (Marmite) would welcome me back as if I’d been away forever – can’t imagine what he’ll be like when I return!  It’s strange to think this floating home will be in St Lucia in a matter of days. I just want to hold the feelings this amazing trip has stirred in me – we really are a lucky bunch – if a bit stinky!

Heading back on deck, love to all, Becs x x


Quite a few squalls with heavy downpours and lots of wind taking us off course (due North) for a short while. More vessel traffic, with some yachts crossing our path on the other gybe.

Gybed back to Port after a big wind shift.