The history of King Canute and the location of his ‘moment with the sea’ is of some dispute.

A tide of opinion was raised on our Facebook page when we put out the claim that King Canute tried to turn back the waves on the banks of the River Crouch.

As part of our evidence we suggested you read East Anglian Shores by David Fairhall, who claims Canute’s supposed folly happened at Cliff Reach, just below Canewdon.

In response Toby Baxter came in with the case for Bosham, West Sussex and reminded us that Canute’s story was “…one of the most misunderstood quotes of all time, he was making the point to his government that even a king does not have divine power. This was a powerful revelation in those days.”

Nigel Greenyer backed up this claim by adding: “I think it was Bosham his daughter is alleged to be buried in the fantastic Saxon church.” And in a moment of realism Ciara Downes added: “Or if it really happened?”

As far as the Southampton office is concerned the East Coast might have a worthy book to back up their claims, but we have more! Not only do we have a road and hotel named after Canute, but most importantly, we have a plaque! 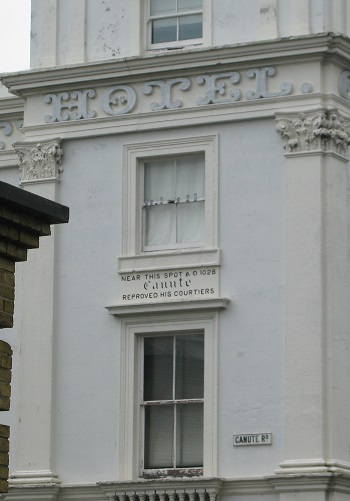 The King of High Tides

Canute was 40 when he died in 1035. He was also known as Cnut the Great, King of England, Denmark, Norway and parts of Sweden. By the time of the Norman Conquest in 1066 his story was quickly becoming lost to time but his relationship with the tide lingers on.

We can thank the historian Henry of Huntingdon who recorded the story of the tide in the 12th Century. The general consensus is that Canute sat his throne on the beach and commanded the tide not to rise so that his royal presence would remain dry, as Toby pointed out above this was not actually the case.

Apparently Canute was trying to prove a point about Kings and God: ‘Let all men know how empty and worthless is the power of kings, for there is none worthy of the name, but He whom heaven, earth, and sea obey by eternal laws.’

Whether that quote is accurate is probably also of some dispute but the sentiment is clear. Kanute wanted to show those around him that the King was not divine.

After failing to hold back the tide, King Canute removed his crown, hung it from a crucifix and never wore it again in honour of Almighty God.

Either way King Canute got wet legs. Let’s hope he rolled his trousers up first.

As for where this event took place, there are multiple contenders, each seemingly with their own supporting evidence. Theories include Canewdon, Bosham, Thorney Island (now Westminster) and of course Southampton where is also alleged to have been crowned.

The story of King Canute is so vague and full of questions it would be hard to know where to start when answering them. Perhaps that’s what makes the tale so enduring. Maybe the fact that so many different places can claim to be the location of King Canute’s battle with nature is precisely why the legend still lives on today.

Having said that, Southampton has a plaque. That makes him ours, in our opinion!

Do you have your own King Canute theory? Get involved below or on our Facebook page! You can read more about King Cantue here