Expect some sheltered cruising of the Norwegian Fjords, followed by some potentially testing sailing to the Shetlands and then a few days to have a good look around.

Join the yacht in Trondheim on 22nd August. The intention will be to head SW along the Norwegian Coast in the inner passage way exploring as we go and taking in the vast landscapes.There will come a point when the weather is right, 'ideally' when the boat reaches the western tip of this stretch of coast to head west to the Shetland Islands. The crossing should take about 2 days leaving a few days to explore the Shetland Islands.

The yacht is a 55ft Bruce Roberts ketch that takes 8 people. There will probably be only 6 or 7 people on board and there are only two double ensuite cabins available. 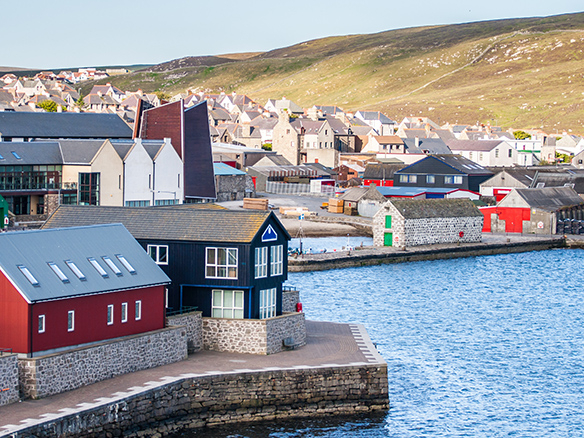 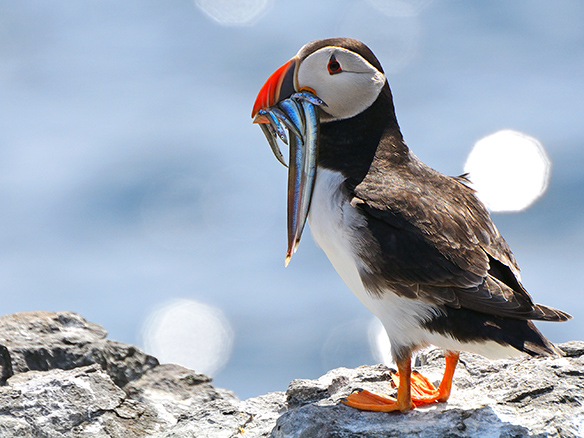 The Shetland Islands are a magnificent and rugged sight to behold. The Gulf Stream keeps temperatures warmer than perhaps you would expect for somewhere so far north.

The Shetland archipelago is a part of Scotland, with only 15 of the over 100 islands being inhabited. This gives Shetland a sense of tranquillity and allows an abundance of wildlife to thrive.The seas have carved out dramatic cliffs and sandy bays, whilst inland rugged hills and meadows covered in flowers, all of which offers great bird watching, hiking and photography opportunities.

The climate is very changeable and a beautiful clear sky, could become fog in a matter of seconds. The islands are frequented by a over a million seabirds and is one of the largest bird colonies in the North Atlantic. The Atlantic Puffin, Storm-petrel, Northern Lapwing, Gannets and Winter Wren can all be found here. The islands are perhaps best known for the Shetland ponies that have been kept here since the Bronze Age, with their warm coats and resilience to the harsh winters proving useful for transportation and farming needs.

Lerwick is the main town and port of the Shetland Islands, with a population of 7,000 and is also the northern-most town in the UK. You will see a mix of fishing and pleasure boats with historic crafts and visiting yachts. The old town is built around the port and has good amenities and shops considering the remoteness.

Have a look at the following website to get a good idea of the dramatic and quite breath taking scenery: https://www.shetland.org/

Santosa was launched in 2017. She is a 55ft (16.7m) steel ketch of Bruce Roberts design with a high latitude rig and has been built with exactly these sort of waters in mind and to provide an exclusive and luxurious experience.

She has hydraulic headsails and an electric mainsheet winch. She has two helming positions, one on deck in the cockpit and one in the spacious coach house allowing you to steer the boat staying cosy and dry if it is cold and wet on deck.

Displacing 33 tonnes she is a solid boat. She is ‘coded’ to Category Zero meaning her structure, the safety equipment on board and the experience and qualifications of the skipper and mate meet the UK’s Maritime and Coastguard Agency (MCA) international standards to sail anywhere in the world.

She has heating, air conditioning, hot water, a water maker. 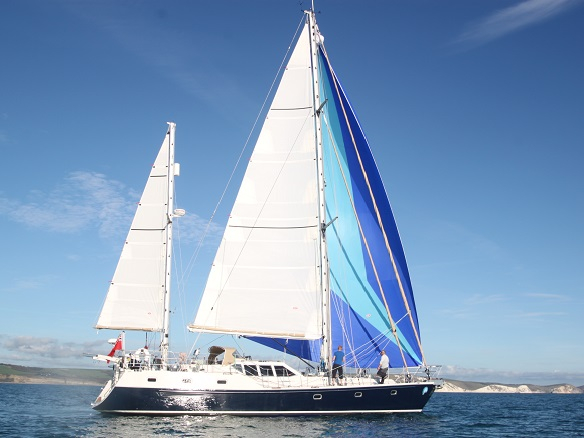 More Photos
Book Now
Stage payments are an option call 0203 006 3717 or email the office for details.

From the cockpit you come down into a spacious and sociable coach house with a raised saloon area offering panoramic views, leather seating and a dinning table. To starbaord there is an indoor helming position (lovely when chilly outside!) and a navigation area.

Aft of this area you step down into two luxury en-suite cabins, one each side of the boat. Plenty of storage is offered and a wardrobe. The en-suite has a power shower with seating, heated towel rail and electric flush heads. The cabins also have heating, aircon and black out blinds.

Forward of the coach house saloon, you go down a level to a well designed galley on the port side and a snug seating area to starboard. Beyond that is mainly crew accomodation consisting of another heads, another double cabin and two bunk beds, and a work shop right up in the forepeak. 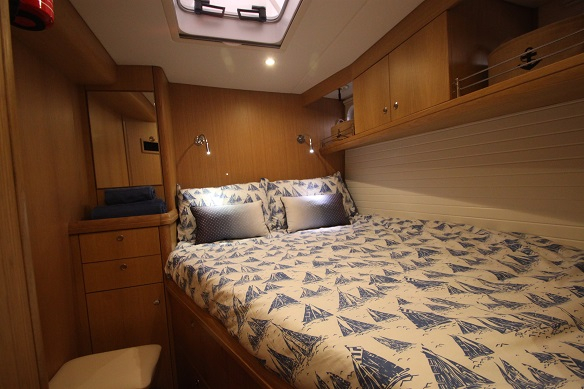 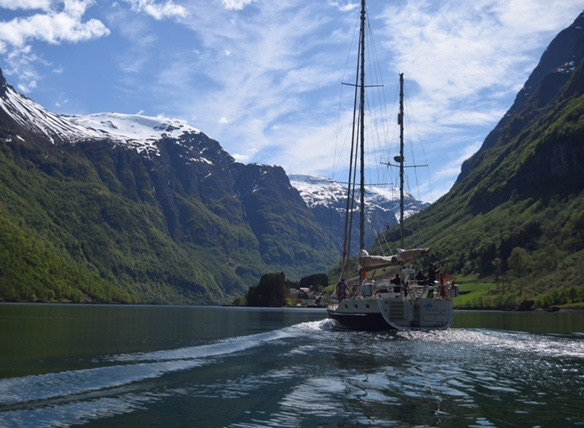 You will need to be healthy and reasonably fit.

Food on board is included and made for you, bar 2 or 3 meals ashore, giving you the opportunity to taste the local cuisine! Whilst our experienced skipper and mate are perfectly capable of sailing the yacht by themselves you are most welcome to take part in all aspects of keeping a watch, navigating and sailing the boat.

You should get some exciting sailing. You will see some dramatic scenery.

The trip will not be as cold as you might expect. The weather can be fickle, like it is in Scotland but crystal clear and sunny days are not uncommon.

It will be the height of summer so whilst chilly at night you may be in shorts and t-shirt during the day. Expect lots of daylight when on night watch.

There are 3 double cabins, two of which are available.

Come by yourself, as a couple or with a friend.

Included in the price is all food on board (except 2 or 3 meals), mooring fees, fuel, gas.

You will need to purchase your own insurance which will cost around £35 from someone like Topsail Insurance.

You should aim to join the boat as close to 4pm as possible, on the start date of your chosen leg.

On the final day you will disembark from the boat at 10am.

Trondheim is served by a number of airlines and there are plenty of daily flights.

Flights to Sumburgh Airport in Shetland frequently run through one of the Scottish airport hubs of Aberdeen, Edinburgh or Glasgow. So, unless you live close by one of these cities then it usually take 2 flights to get there. Total flight times range from 4-6 hours from London.

The yacht will sail down to the Orkney Islands and onto Inverness, before sailing through the Caledonian Canal to the Isle of Skye off Scotland's West Coast, followed by a cruise down to Oban. She will then head south down the Irish Sea to Falmouth. 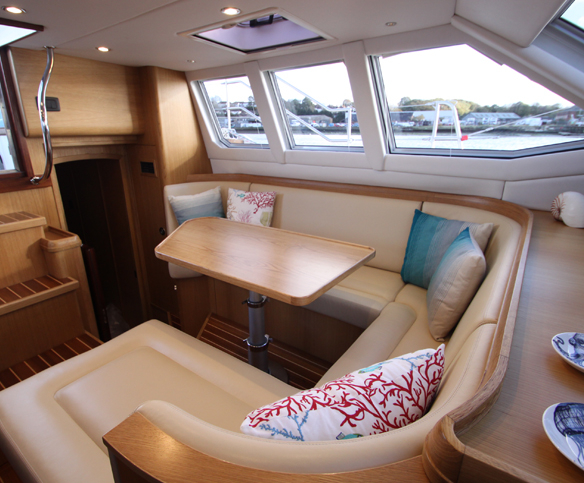 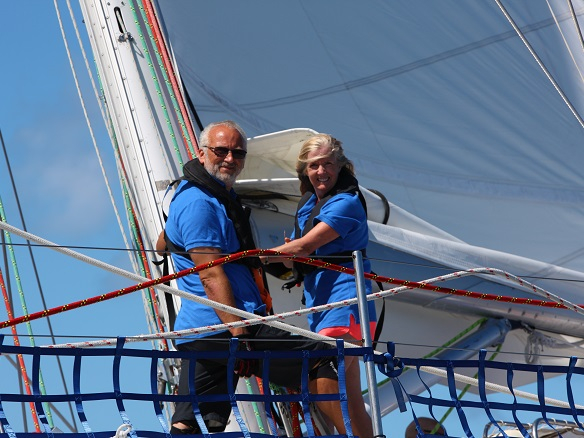 Other Legs of this Voyage

Santosa is sailing from Southampton in the UK, west along the South Coast, up the Irish Sea to Scotland, through the Caledonian Canal, over to Stavanger in Norway, then up the Norwegian Coast to Tromso before heading to Spitsbergen in Svalbard. From there she will come back down as far as Trondheim before heading back across the North Sea to the Shetland Islands, the Orkneys, through the Caledonian Canal to the west Coast of Scotland, then back down to Falmouth. During this whole voyage there are a number of different legs that all have slightly different sailing aspects to them. For example some are purely coastal cruising whilst others have a large part of offshore sailing to them as well as coastal cruising.

Bergen to Trondheim - 300nm and Fjords

Trondheim to Bodo – 280nm and Fjords

Bodo to Trondheim - 280nm and Fjords

Shetland to Inverness - 200nm. Via the Orkneys

Inverness to Isle of Skye -150nm. Through the Caledonian Canal

Isle of Skye to Oban – 70nm West Coast of Scotland

Bodo to Bodo - Sail in the Lofoten Islands

Bodo to Tromso - Sail in the Lofoten Islands

Tromso to Bodo - Sail in the Lofoten Islands

Inverness to Bergen - Cross the North Sea and cruise the Fjords

Shetland to Inverness - Via the Orkney Islands

Inverness to Skye - Through the Caledonian Canal