On Monday, Moonshadow and Kingfisher set off from Fambridge Yacht Haven on the River Crouch to Newcastle-Upon-Tyne on Leg 1 of their Sail Round Britain Adventure.  They left the busy shipping port of Felixstowe in glorious East coast sunshine.  The blue skies and settled winds provided a sedate sail up to Lowestoft.  Once clear of the shipping channel, navigation was fairly straightforward … although they had to take avoiding action to negotiate poorly marked drift nets.

The Trip will see the boats stop at around 30 ports, pass through the Caledonian Canal and cover over 1500 miles.

Last night both boats were nicely tied up at the Royal Norfolk and Suffolk Yacht Club. Thanks to the RNSYC for waiving their mooring fees. That’s another £60 in the Macmillan pot! The sailing yesterday went from gloriously exhilarating to frustratingly slow with winds becoming light and variable. Today they set off for the 30 hour journey to Whitby. The crews, who are all getting along well, may have been tested last night as Paul cooked a curry! 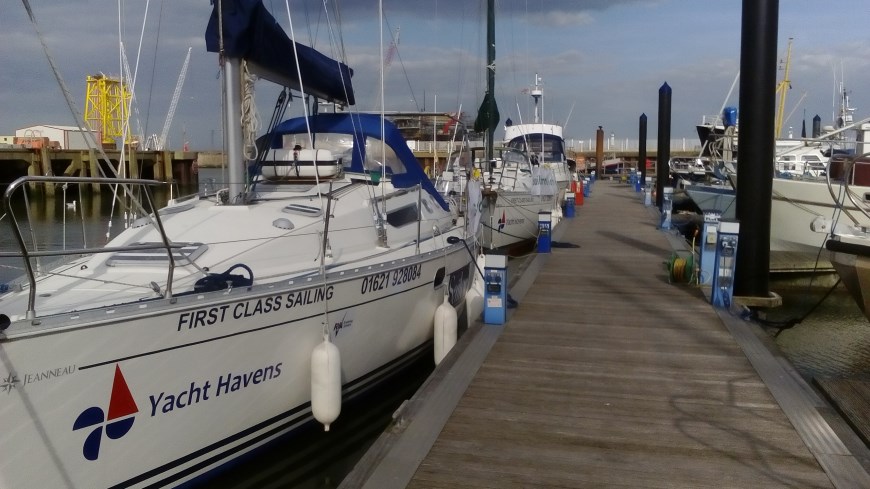 Both boats alongside at the Royal Norfolk and Suffolk Yacht Club

The next leg of 150 miles to Whitby seems somewhat daunting to some of them as the hour of departure approaches.  How will they all fare doing three hour watches through the night?

The trip is split into 7 legs, each between 5 and 7 days long.  There is still space on some of them. Have a look here for more detail and/or contact the First Class Sailing East Coast office on eastcoast@firstclasssailing.com or 01621 928084

In addition to providing the opportunity for lots of people to join the boat and sail either legs or the whole voyage the boats will be raising money for Macmillan Cancer Support.  There will be BBQ’s and fund raising activities at many of the marinas the boats stop at.

The boats are aiming to raise £5000.  So far they are on £1860.  If you would like to learn more about why we are doing the trip or would like to make a donation visit https://www.justgiving.com/First-Class-Sailing-East-Coast