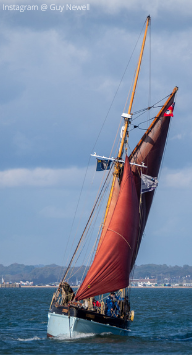 This kind of boat was built to be a stable working platform from which to trawl a net along the sea bed and then return to port with their catch as quickly as possible and in all kinds of weather.

Built for the Job

Golden Vanity is constructed of Oregon Pine planks fastened to sawn oak frames. The frames are made up of doubled futtocks, meaning they are solid! In places a 3 rd futtock has been added.

The boat is made in a type of construction called Carvel construction. Carvel construction is a method of building a boat in which the hull planks are laid next to each other, edge to edge and without overlap, and fastened to the frames. To stop the water getting inside the boat, oakum, which is a loosely twisted rope like material, is jammed tightly in between the planks and then sealed over with a caulking sealant or traditionally a pitch tar.

The mast is made of Douglas Fir, is hollow and made in the method of bird mouth construction. This is where 8 rectangular lengths of timber have a triangle chopped out of one edge allowing the faces another piece to neatly slot in. Hollow masts built in this way are deemed to be 15% stronger than a solid mast.

Edgar J March, the author of several bookings on fishing smacks, gives a wonderfully evocative description of what went in to building a boat such as Golden Vanity in his book Sailing Trawlers:

‘There was a sense of power and purposefulness about a fishing smack which instantly appealed to the eye of a seaman. Built for her job, she would do it come what may and it needed more than a gale to overwhelm her. Seen in the quiet calm of harbour, hull and spars might look heavy, even clumsy, with rigging of inordinate strength, but they were not for the halcyon days of summer and gentle zephyrs. A smack was seen at her best in the bitter gales of winter, riding the seas like a gull, facing weather that sent other vessels flying for shelter while she carried on her lawful occasions. Her mast was no gilguy, designed with a slide-rule and stayed by streamlined wires until it resembles a birdcage. It was a solid trunk, straight grained and stepped right down on to the keelson, giving a little to the freshening wind which so often brings disaster to the scientist’s dream of a perfect mast. 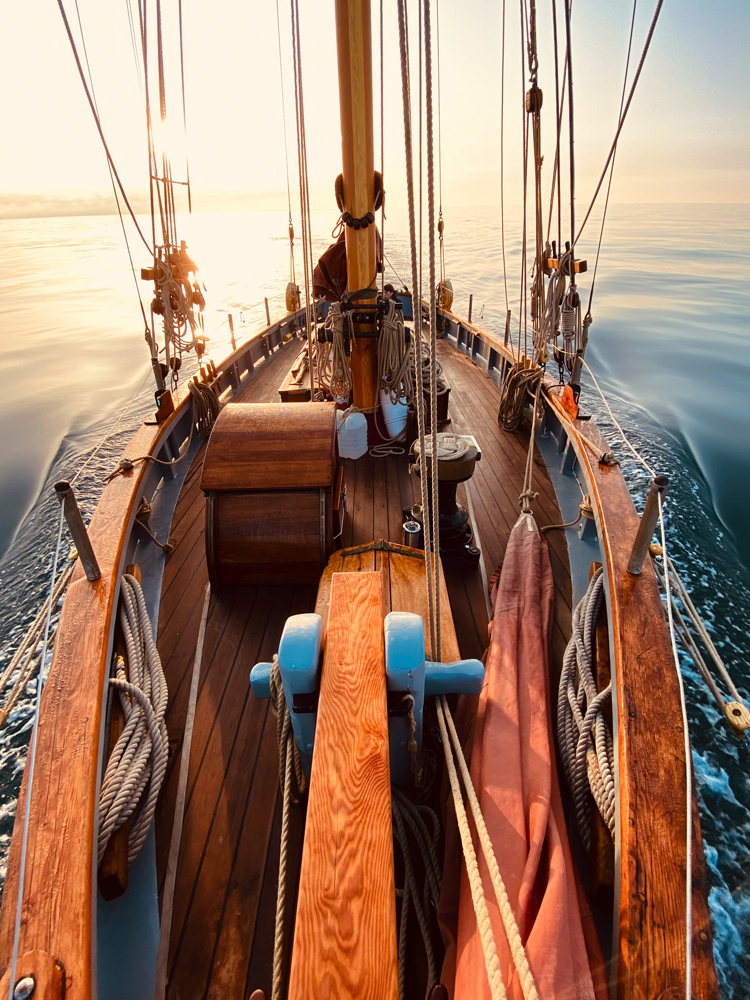 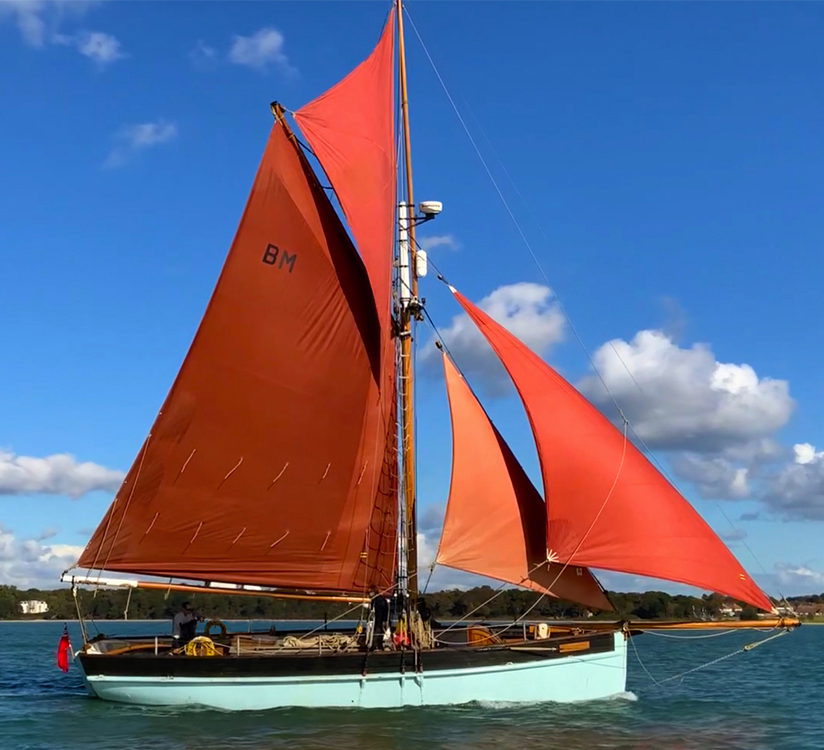 That splendid bow would shoulder the seas aside, seldom taking green water on board, the hull, buoyant as a cork, was framed of good English oak, wrought by the eye and cunningly curved with the beauty of line that was a joy to see. Here was no product of a testing tank and intricate calculations, but the concentrated knowledge of generations of men who knew from practical experience what was best suited to their needs.

Those graceful curves came from the natural growth of timber, from age-old monarchs of the woods, that long had stood in summer sun and winter cold, gentle rain and perishing blizzard, living out their lives in God’s free winds. Then, felled at the choice of men steeped in the lore of centuries of woodcraft, handed on from father to son – which fields and slopes provided trees most suitable for their requirements, as texture varies according to nourishment given by the soil – how long the logs should season in the rough before the slender saw ripped through the fibres and revealed the heart of oak, never before seen by mortal eyes, which started to form 120, 150, maybe 180 years before. As the keen blade cut its way through the baulk the very tang of the forest rose when the sweet scented dust fell in a gentle shower on the bottom sawyer.

After due seasoning came the work of gnarled old shipwrights who erected the curved frames on the massive keel and clothed them with planking worked and bent to shape. No paper plans, only a rough half model, gave sweetness of line, and the master builder’s eye was the unerring arbiter, and his knowledge the safeguard that all would be well when the testing time came, as come it would, sooner or later.

Old England at her best and true craftsmanship! 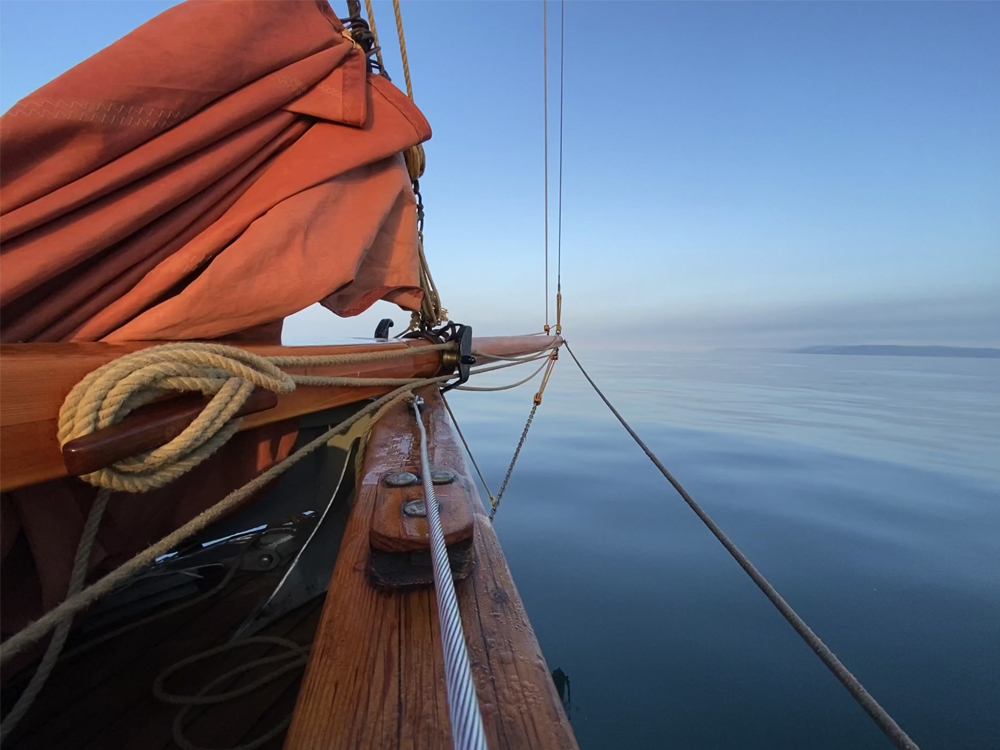 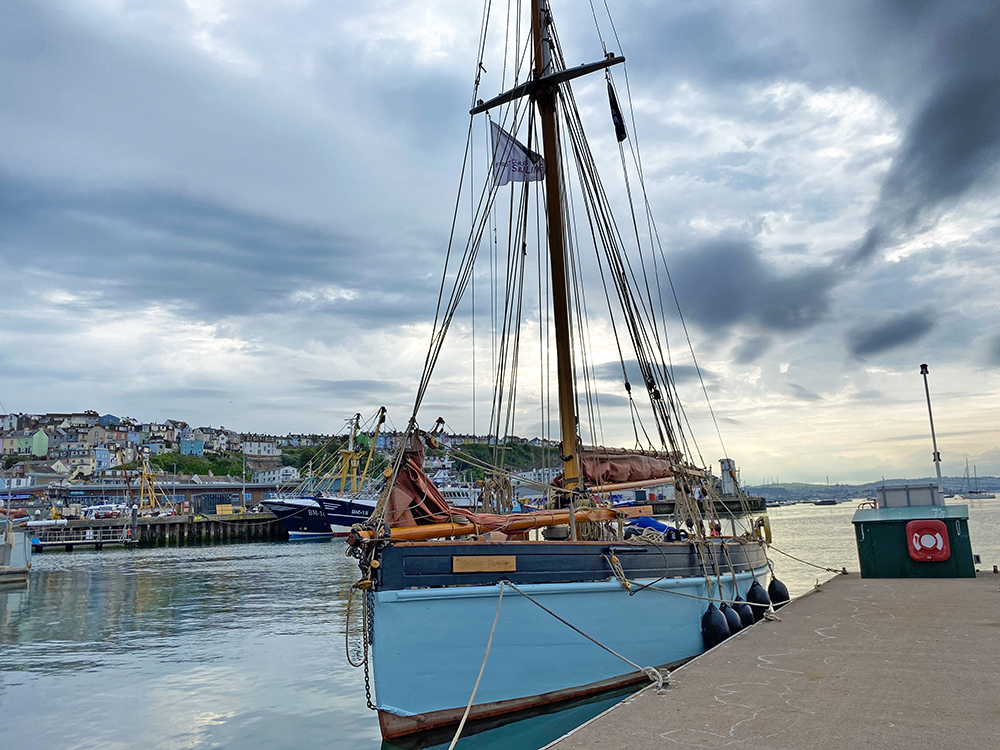