Thursday 10th August – Bruce, Julian and the mate Kirstie report on rounding the Rock, the chances of bashing into the Rock if at least one person doesn’t get involved in taking photos and frustrating calms. 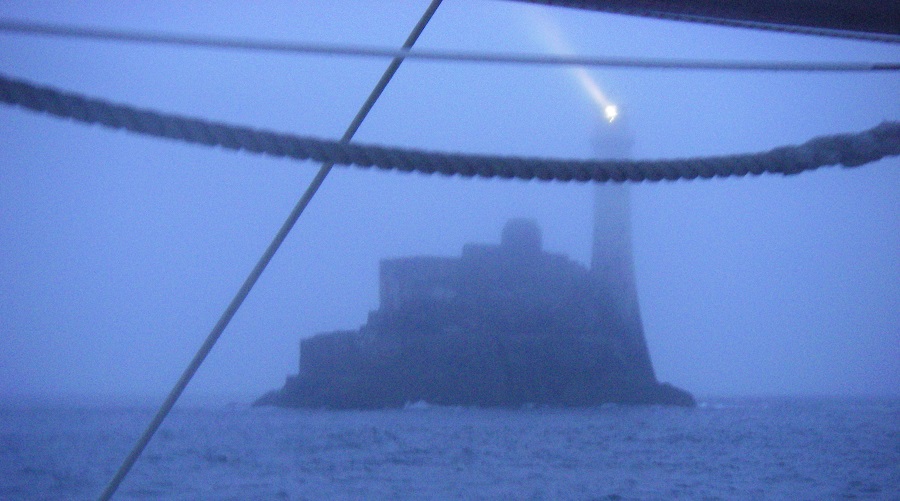 The problem with a long Fastnet race (as opposed to the lucky folk who get to ride on a spaceship made of light weight carbon fibre and not a hint of gaffer tape anywhere, and who therefore are generally drinking beer by Tuesday am at the latest, damn them), is that the question invariably arises in one’s mind as to whether one’s boat will achieve the rock before someone gets to helm, who has an uncanny ability of bringing on a calm break in the wind. Consistently. Thus it was, 50 miles away from our turning point, we were wondering whether we’d have to tack back and forth along the same line for 5h, getting only a sense of déjà vu about land ahoy.

As it happened, we were pleasantly surprised; we managed to keep all afflicted helms men and women of the Becalming Curse below deck, and a fair wind sent us onwards under a starry sky surrounded by dolphins breaching the water and occasionally igniting the glow of bioluminescent algae as they took a breath. It was a beautiful midnight approach, achieved by Beth helming to perfection to give us a single tack as we passed green lights of varying height, ending with the Fastnet light house silhouetted by the moon as we rounded with the green, red and white masthead lights of the boats around us.

The full moon also gave those of us who have done the Fastnet before, but who have only ever not seen the rock, in darkness or fog a whole new experience; the idea of what it might look like in the day…apparently this is something of a novelty for sailors of Challenger 3.

One cannot also approach the rock, or any rock / shore / other boat for that matter, without at least one person commenting on the potential for hitting said object. This has been a theme of the past day for sure, as we learned about some obscure class of boat coming to a full stop from 5kts right in front of a professional photographer atop the light; it is my suspicion that the cause of this embarrassing prang may have its root in the fact that the rock tends to turn entire crews in to photographers themselves.

In the case of Challenger 3, Ricky lost most of the crew to this new found passion, right at the time that we needed to do a fairly chunky sail change and run out the main pole, (a nautical turn rather than the new UK immigration policy), for our approaching downwind leg, at full speed, towards home. 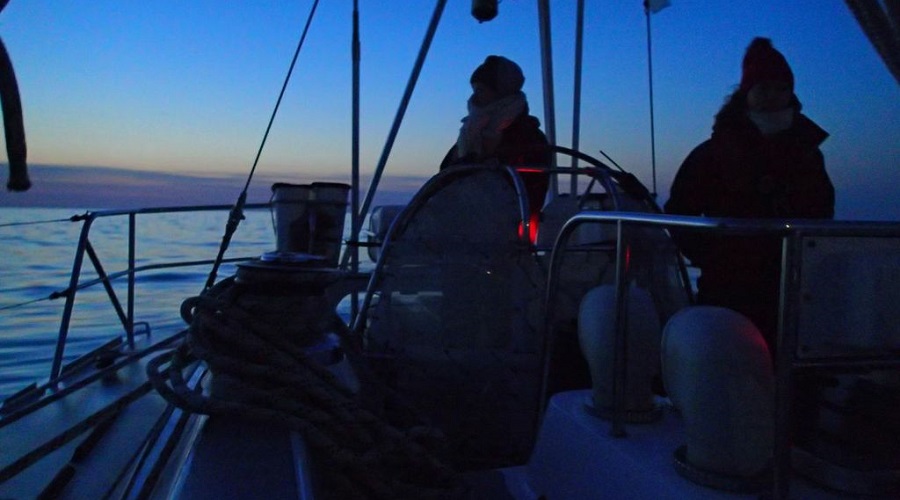 It was at this point that the long race problem reasserted itself with a vengeance. We ran out of windy people to hold the wheel and were left only with those afflicted with the Sailors Becalming Curse. Thus we are, 11h later, making top speed of 4.6kts (fast for today!), discussing why ‘poisson & chips’ (boredom makes people French apparently) is the best food for men…and as chocolate brownies are being offered around again, we are signing off the blog with the note that we are beating Challenger 4 and suspect Challengers 1&2 may have been stealthily adding carbon fibre to their vessels lately.

Ps. People have had showers in a bid to shed some water weight, which has created a strange memory of civilisation amongst the crew who have not had showers.

Pps. Kirstie just stole the mouse to do a log and stole my ability to typ

Words from the Mate

Last night saw us round The Fastnet Rock.

For Ricky, Steve and I, memories of the same event two years ago loomed in our minds. We had made a fine approach to ‘The Rock’ and managed to storm away a lead on the other 2 Challengers, however on making the TSS we were halted by a becalming and shifty wind that lasted some 4 – 5 hours! (a whole watch!) in this time we sat anxiously as the others caught us up.
With these stories flying around our current crew we were pleasantly surprised as we made the TSS in just a couple of tacks.

A tense couple of hours of tactics involving me zooming up and down on deck wishing the wind to lift us and teasing out the best course and expert helming carried out from Beth with a full face of concentration helped us to make the corner of the TSS. With more boats squeezing around the point I called Ricky up for his expertise and handed over with relief and satisfaction (big smiles). The night was starry, the seas flat and the twinkling of the many masthead lights bordered the bright light of the Rock itself.

Sail changes whilst Rounding the Rock

Ricky set us to the best course for the rock and we discussed post Rock plans. Here came the tricky part! We were flying our Genoa and needed to drop it before bearing away…at the same time we had to hank on the Yankee 1, hoist it, set the pole and grind across. Somehow with all the crew on deck we managed to pull it off in good time.

Soon the light of the Rock began to fade…and so did our wind . The decision was made to keep the Yankee 1 poled out and keep the spinnaker safely in its bag. Watching Challenger 4s speed closely we were relieved and delighted to see they didn’t seem to have flown their spinnaker also.

After a flat off-watch sleep I was awoken to be told that we hadn’t made it half way back across as I’d secretly hoped and, instead, we were drifting making just a couple of hard won knots through the sea. However the sun was shining and it allowed both myself and the crew to relax on deck (except the helm who was on orders to make ridiculous speeds!). 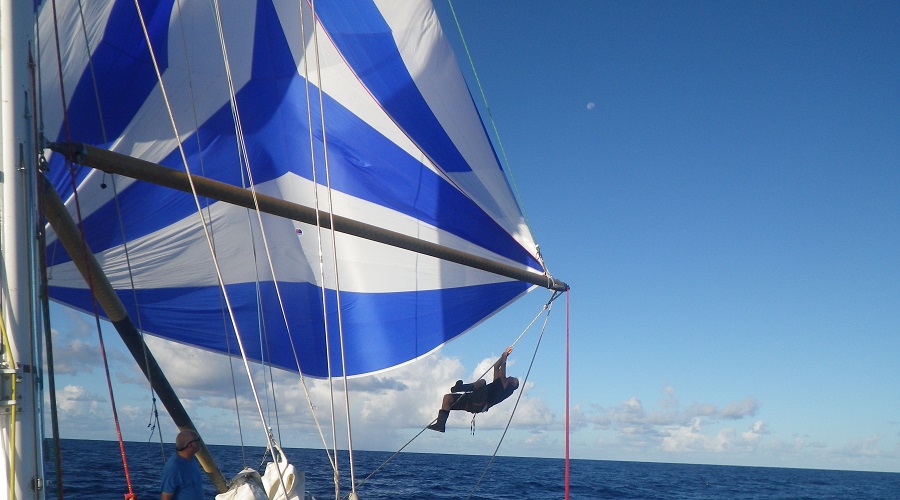 Ricky popped his head up on deck at the start of his watch, and, obviously bored with the lack of action called for the spinnaker to be prepped…his words being something like “Kirstie, spinnaker, make it happen”. And so we did! The Yankee 1 decided to mate with the spinnaker and the foot somehow lifted with the spinnaker on the hoist, but after a bit of a tug we managed to part them!

The big blue and white thing is now merrily flying from the mast (and other parts of the boat of course!), lunch is on its way (brie and cranberry baguettes!) and folk are enjoying a shower.
(just as well as from the noise from the deck a bag of loo paper was just thrown to windward and ended up back on deck!).

We have been steadily increasing our lead on Challenger 4 however it is all still to play for and anything could happen. The wind is due to fill in from the SW this evening. The race between the two ‘broken boats’ at the back Challengers 3 & 4 has been amazing so far. Currently only 8 miles separate us after 545miles of hard racing. Whatever happens it shows that each boat and crew have raced to their best and pulled out all the stops.

I best go get my harness on now and do some work!