A beautiful start to the day as the sun crept over the horizon and lifted gently into the sky giving us a treat of a serene sunrise, we’d swapped watches at 3 am the heavens still full of stars but the day soon broke and dolphins were once again our friends, leaping, playing and swimming in numerous pods sweeping alongside and under the yacht as we gently sailed from Lands’ End onto our journey to the Scilly isles. One of the crew shouted ‘whale’ and we all rushed over cameras at the ready to find it was a dolphin – since seeing a dolphin become less of a highlight as we’d seen so many,  we laughed, next it will be albatrosses!! Maybe not!

The Idyllic Scilly isles were absolutely beautiful bathed in sunshine, a balmy almost Caribbean feel, we lay in the decks looking out at the beaches, relaxing and chatting, dolphins jumped and played around us. Challenger two was just ahead of us having slipped by earlier but we had her in our sights and we’re not going to let her out of our sights, we were after her! Consistent sail trimming took place to gain as much speed as we could in the light airs of force 2-3. What a difference from just 24 hours ago in the stormy endurance test of the start of the race. We now learn that 80 yachts retired, many before even passing the Needles, many with gear breakage, hopefully, no one got hurt. We felt lucky to be still on our adventure to the Rock.

Heading out away from the Scilly isles the vast expanse of the Celtic sea lay ahead of us with its Atlantic swell of rolling waves, it felt different, a vast sea, no longer near land, we headed west.

Dinner was Thai green curry and very welcomed by a hungry crew who had also had porridge that morning before normal cooking would have been unsafe in the galley due to the winds and sea state previously. Tee who is a ‘eat your heart out nigella’ brilliant cook then decided her next cooking venture would be ‘Cooking at sea with tee!’ thought it was a great idea myself!

The Yankee two changed to the big Yankee, the work was exhausting and Mike our skipper had to work hard to keep us moving, we were all still jaded from the previous heavy weather. We all sat on the edge of the yacht’s high side as we watched the ever-increasing Atlantic rollers under us. The watches changed and again working hard to catch up with our nearest rival challenger 2. 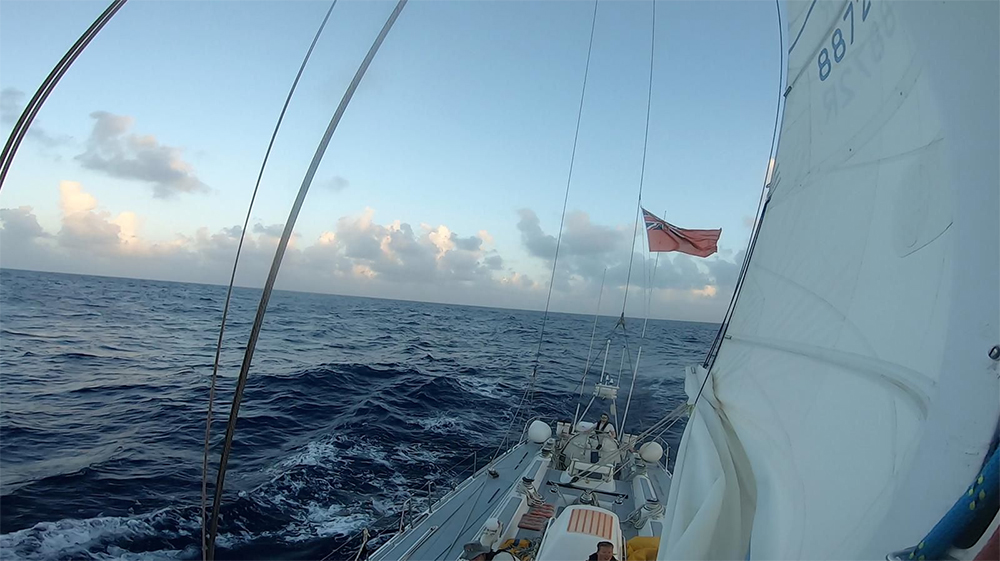