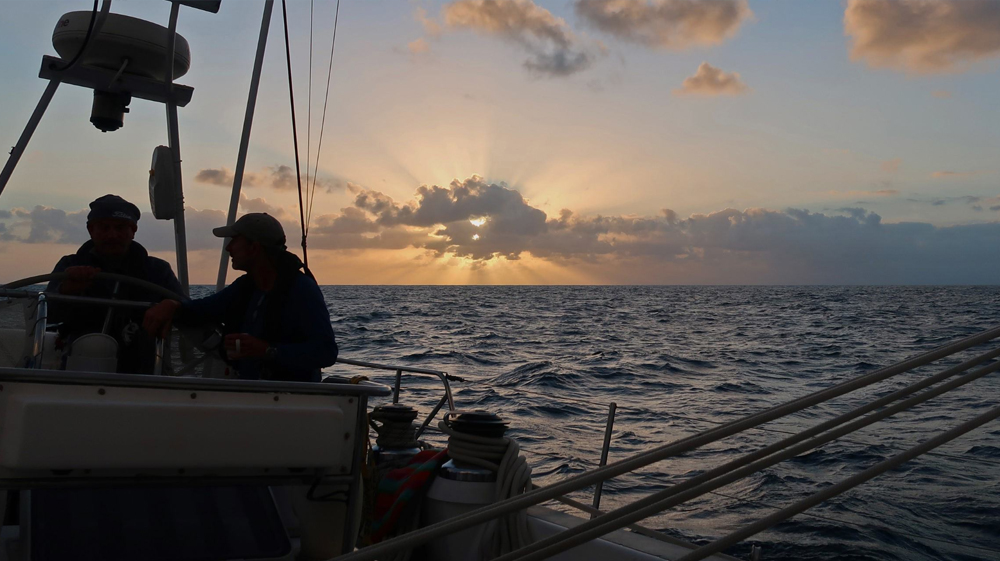 It was a deep deep darkness, I thought of Skipper Mike saying ‘it’s a screaming reach’ as I held onto the helm wheel feeling the wind, the yacht moving wildly, ‘like a bucking Broncho, Mark the watch leader said I needed to concentrate hard, watching the wind indicator and the compass in the darkness, all I could see were the handful of illuminated navigation instruments on display, I couldn’t see the sail in the darkness, the wind indicator bobbing wildly at the top of the mast, I couldn’t focus on that too much, I heard the comforting voice of mark my watch leader ‘are you ok’ from my side, all I could see was his silhouette in the darkness, I couldn’t see the rest of the crew huddled in the cockpit. The wind howled around, The waves showing their white tips but now illuminated by bioluminescent phytoplankton a silvery emerald, our large wake splashing the luminescence further, it was purely magical, almost mystical, ‘ something from another planet’ Mark one of our crew said.  The bobbing lights of challenger 2 are only now 1 mile away we were hunting them down like a panther in the night. We’d heard they may have suffered gear failure – it happens.

The wind howling, our boat heeled over hard moving fast through the water at times 14 knots, we put a reef in under darkness, not an easy manoeuvre in the day let alone in complete darkness with only our redhead torches to help us. The previous watch had to take evasive action as another huge four-masted tall ship didn’t make its intentions clear, it’s not something you want to do with a big powerful yacht as ours.

Mark one of our crew helmed us past challenger 2 and left her in our wake we were on a mission heading towards the Rock, taking the wide-angle to avoid the TSS (traffic separation zone) that no yachts are allowed to enter.

All the crew worked hard that night, strong winds and choppy seas we welcomed the morning with a lull in the winds as we sailed around the edge of the TSS, the wind dropped, the drizzle started and the mist filled all around us, we could just see the shapes of the rocky coast of Ireland, Cape Clear island being anything but, the seabirds gannets, guillemots sweeping the sea, dolphins once again visible by our side. The previous watch looked cold and wet and glad to go below. A reef was taken out as we sailed towards our destination, keen eyes looking in the mist and then there she was a jewel in the emerald sea – the Fastnet rock. Standing tall and majestic the lighthouse sat partly on its ragged rocks below, waves crashing at its side, the remnant of the former lighthouse tower making the current one seem austere and forebodingly taller. Seabirds circled this infamous rock, the crew jubilantly erupted in a round of applause and cheers, we were here at last!! We chatted excitedly with the other crew coming up out onto the steps to see her, cameras at the ready. For some reason ‘black adder’ jokes filled the conversation, everyone laughing, very odd you may think, I think we were all a bit delirious at this stage!” We were still far away, there was still work to be done, we tacked relentlessly giving ourselves the best line to pass the rock on our port side, looking behind a run of yachts followed in our wake. The Fastnet rock is just awe inspiringly brilliant, emotive as it was the last rock of their homeland that thousands of Irish emigrants saw on their journey to America, but we loved its granite drama, it felt quite touching that we were finally here right beside her, heard so much about her and here she was, our goal all along, we took so many pictures. It was just terrific. 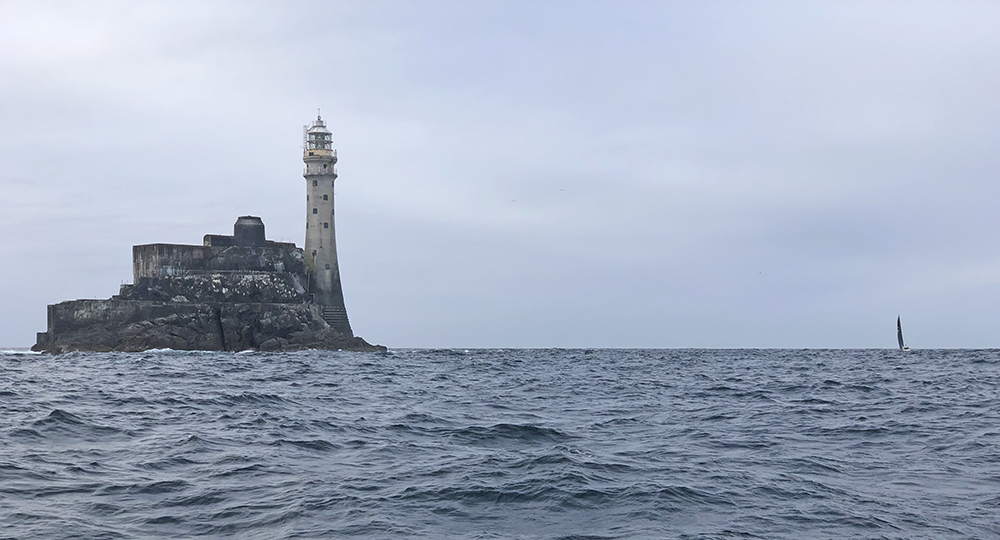 But of course that was only half of our journey and now we had to get to Cherbourg we were still racing. With challenger 2 behind us we bore away and poled up the spinnaker pole attaching the Yankee, the sun came out glistening ahead of us on the water we sailed for quite a while. With speed on our side making 9-10 knots but direction not so well, skipper decided to hoist the spinnaker, it takes quite some preparing to hoist such a large spinnaker but she went up beautifully, blue and white the wind filed and we were off then only a few minutes later we heard an almighty rip and we watched as a tear ripped through the whole length of the sail from top to bottom there was a crazy scramble to salvage the out of control full spinnaker as it swept into the sea,. All hands on deck now grasped desperately at the torn spinnaker, some disappearing under the boat, a part ripping away never to be seen again, we salvaged the rest and dragged it aboard. Exhausted, but keen to resolve the situation the pole went back up with the goose-winged out Yankee. I think we all needed a deserved hot cup of tea.