It was 7pm and back on watch. The current crew had enjoyed a lovely afternoon bathed in sunshine, oilies had come off, even Ray put his shorts on, suncream, sun hats and sunglasses were the order of the day and everyone was happy. We swapped watches with Bex one of our watch leaders telling Austin who being his usual cheeky self was told to ‘get to bed or face a disciplinary’ he is a handful, Bex grinned. We all laughed. Later she said she may recommend him for watch leader, he is already known by the crew as ‘the commodore’! The crew are all amazing and everyone has become warm close firm friends.   As we sat on our watch relaxing in the sunshine thoughts came into my head of the helicopter that flew overhead yesterday hovering for ages over the yacht behind us with its spinnaker full, it had circled low all around us with its side door open, a photographer leaning out with his or her camera, we had laughed and waved, how great was that, we think it had just been back to the Rock and following the trail of yachts as they race homeward. I remembered fondly of the silly banter we had had as we approached the Rock, Scott joining in the laughter and chatting about putting underpants on his head, pencils up his nostrils and saying wobble! (Black adder again) We are a crazy lot, I remembered Dean looking like a drowned rat, poor fella, as rain had collected in the reef on the main and had poured out over him like a shower, Ray and Austin thought it was funny Dean didn’t! I also remember opening the forward hatch, Mike our skipper down below in the sail locker ready to heave the unbelievably heavy spinnaker out of the locker, it took myself, mark and Tee to lift it, the boat had lurched and a large wave swept over the bow flooding us all, the seawater pouring into the depths of the sail locker below absolutely soaking Mike! He didn’t laugh, we didn’t laugh! Not amused! Had this been in the warmth of the Caribbean my naughty sense of humour wouldn’t have allowed me to keep a straight face and I would have most definitely laughed! Whoops sorry Skip! The fond thoughts of the Fastnet rock flooded my mind with a tender thought for all of those who had lost their lives racing towards this rock many years ago, just like us, normal sailors looking for adventure a love of the sea, I didn’t like to dwell on it. 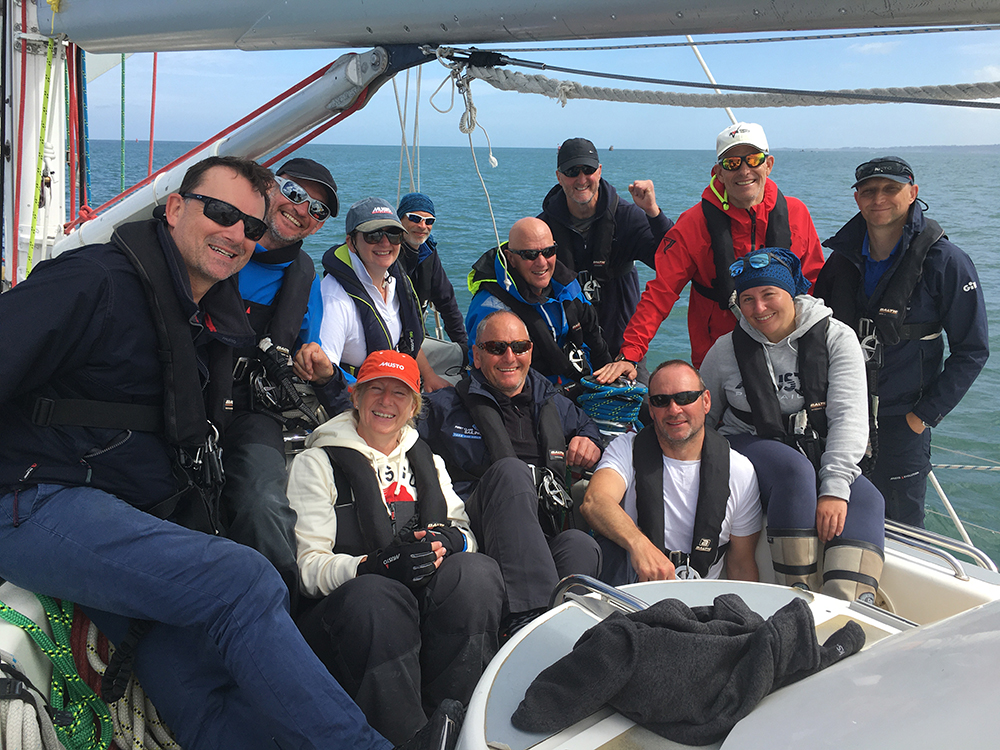 It was early evening, looking east the waxing crescent moon lay softly in the warm glow of the remaining sunset in the eastern horizon behind us as we raced west back across the Celtic sea. The wind had softened to a gentle 5-6 knots, the spinnaker pole long taken down and the staysail once again hoisted, we were sailing a little higher now to improve our speed, eyes at the ready to trim our huge sails to move faster and faster ‘it’s a battle of tactics’ Mike our skipper said of the ensuing battle with our rival Challenger 2 to maintain our lead as the light night airs kicked in.

Twilight became night and the magnificence of the milky way arching over the heavens showed its beauty, wispy white of billions of stars and shooting stars lay above us and around us like a ‘cine 360’ (people of a certain age would remember this – do you? It was 3am, a watch change, those coming off the 11pm to 3am watch the affectionately known as the ‘graveyard watch’ came down the steps into the companionway excited and in awe, they had seen the most magnificent night display of shooting stars and were just enthralled and uplifted, one large shooting star had blazed across the night sky, lighting up the whole sky like a flare lighting the whole ocean, it left a bright blue trail in the sky, beautiful like a firework display Ray described, Will said it was like an airport runway with lights ablaze and Austin ‘a light fantastic meteor shower’ we all grinned uplifted by their excitement it was contagious, we were eager to get up on deck, it was 3am Day 5.

It was chilly, on a broad reach we headed back towards Cherbourg our racing journey home. Sometimes it’s difficult to know what to wear- too little and you sat chilly, too much and once someone asked you to grind the Yankee or anything for that matter you were boiling hot! It was always a tricky dillema. The wind remaining steady we used the compass to guide us west, staying within the TSS Traffic Separation Scheme – an area Mark our watch leader explained,  a north/south and an east/west separate zones in which traffic must maintain in. This is much stricter than the shipping lanes in the channel. Those in the channel can dip in and out of the lanes and shipping can cross horizontally but the TSS is different, boats must enter at one end and out of the other only, it is monitored strictly and there to keep everyone safe, not obeying the rules has strict consequences.

I counted eight fellow racing yachts and could see the starboard lights of those on our port side and those showing port lights off our starboard side. They were a long way away hugging the horizon both sides. I could see the sweeping lights of the huge lighthouse designating the Scilly isles in the distance (renamed ‘Austin towers light house’ (not the actor) aka Bishops Rock lighthouse) according to Austin. As we approached the dolphins came to welcome us good morning, diving under the boat and leaping out of the water, playing and having fun as we approached the Isles. The wind changed direction more on the beam as we passed the islands, we slowed, a quick sail trim to ease the main, staysail and yankee and we were off again, gaining speed. The wind shifted again as we left the isles behind us, sails drew back in to a close reach, with the isles behind us Mark watch leader, Mark, Mike, Tee and myself enjoying some technical sail trimming, it was fun to see how fast we could get the boat to sail with the compass bearing we had to maintain – we were heading straight to Cherbourg.

Our watch was finished with Guy and Adam making delicious egg and sausage sandwiches, it’s 7am we’ve been at sea now for 5 days. I won’t deny it but 15 of on board and that’s a lot of smelly feet and kit, no showers here but the luxury of a small moving head (toilet) like trying to wash in a bouncy castle, most of the chaps on board don’t bother with a shave, a wonder why? Bruises are doing nicely amongst the crew and we’ve even started comparing, I have a corker of a bruise after falling heavily in the strong winds, Tee was quite impressed.

Woken at 1pm, I wandered into the galley half asleep to the tunes of Queen, radio gaga, Scott the music maestro providing the backing tunes and a terrific back catalogue, he was having a karaoke sing as I came into the galley, David and First mate Mike were making a superb carbonara, with David emptying a packet of grated cheese, Tee commented ‘the trouble with grated cheese is that you can grate your nails at the same time’! EEEW.

Birthday celebrations today, it was Mark our watch leaders birthday today, a ‘Morris the Caterpillar’ cake was given (not sure what happened to Colin) as we all sang happy birthday sat huddled on deck in the sunshine in t-shirts and shorts, sunhats and sunglasses, Mark grinned from ear to ear, he was on the helm and looked really chuffed, the cake was delicious.

It was an absolutely glorious day, sunshine, blue sky, we were surrounded by sea, no land in sight, it’s a beautiful way to be, ‘to sail a boat beyond the sight of land’ David’s aspiration achieved. A 12-14 knot wind from the south west, the yankee poled out, a handful of racing yachts and a container ship in the south, Mark on the helm with the Irish sea reaching out beyond, the sun glistening on the water. Bex the watch leader for the cheeky rebels had been designated August in a calender, Ray decided he was January and told me he didn’t think Austin would even make the calender! It made us all laugh.

It was 1pm and Challenger 2 was moving across the horizon to the north of us, their spinnaker up as far as we could make out. We carried on racing 100 degrees or so on the compass, Cherbourg 140 miles away. Mike (First mate) and Mark (Watch leader) became quite excited and up for some fun. As our spinnaker had obliterated itself the day before they decided to use the Storm Jib as an extra sail, this was ingenuity in gold, they were brilliant. The storm jib was lifted out of the sail locker onto the deck, whilst Mike was putting on the climbing kit, Mark (watch leader) and Adam whilst preparing the storm jib to be hoisted sang me a beautiful sea shanty –

A letter from Mark came from the king

To the scummiest vessel I have ever seen

God damn them all, I was told with cruise the seas for American gold, fire no guns, shed no tears

Now I’m a broken man, on Halifax pier, the last of Barratts Privateers.

Fabulous!! Round of applause, what a wonderful moment.

The ropes were fixed and Mike our first mate climbed bravely along out over the splashing wake of our yacht to the end of the spinnaker pole, a good six to seven feet away now hanging there, cleverly attaching a pully system, the rope then passed to the stern, the sail hoisted. It was incredible and looked brilliant, we looked like an old pirate cutter. We had four sails up now, a Main sail, Yankee goosed out with the pole, the Staysail and our new addition the Storm jib. Eat your heart out Challenger 2 with your beautiful blue and white spinnaker. This is style. 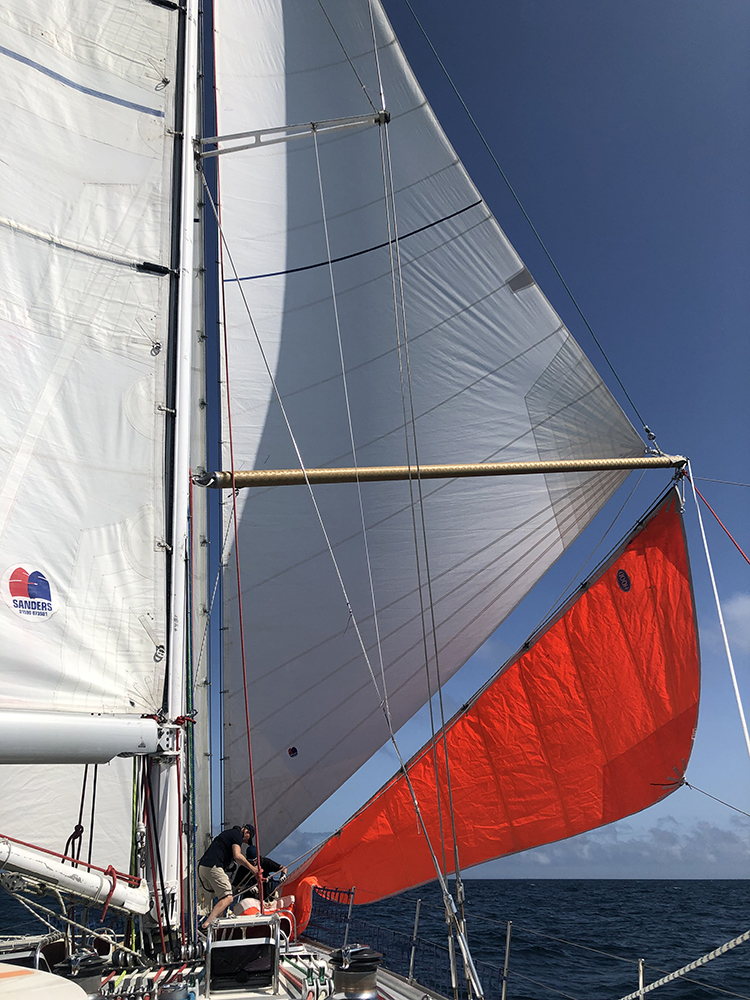 Taking the helm, it was tricky initially to maintain a broad reach, too far and you risk a gybe, too far towards the wind and your poled out sail and our new addition collapses, rolling waves try to pull you off balance, it takes concentration but its great fun. A glorious sail in the bright warm sunshine, everyone relaxing, chatting and laughing on deck, then the dolphins came to join the party.

A large pod of dancing, playful, leaping dolphins, sweeping under the bow and below the depths, we all rushed to see them, we had seen so many. Tee and I leaned over the bow, on our knees holding onto the guard rails cameras in hand, we were treated to a display like no other. They jumped in unison, twisting their bodies to look to see us leaning over to watch, we heard them clicking and squeaking to each other then all at once up to three or four would jump together as though in a dance, twisting and turning quickly back sweeping back under the boat and again to return, swimming fast in our wake, a small calf and her mother twisted to touch bellies before continuing their play. We watched in awe, they were so close we could see their markings, blow holes, detail on their bodies, they are truly magnificent, happy, playful, clearly enjoying us as we enjoyed them. Beyond words, we were heart warmed to our core huge smiles on our faces. 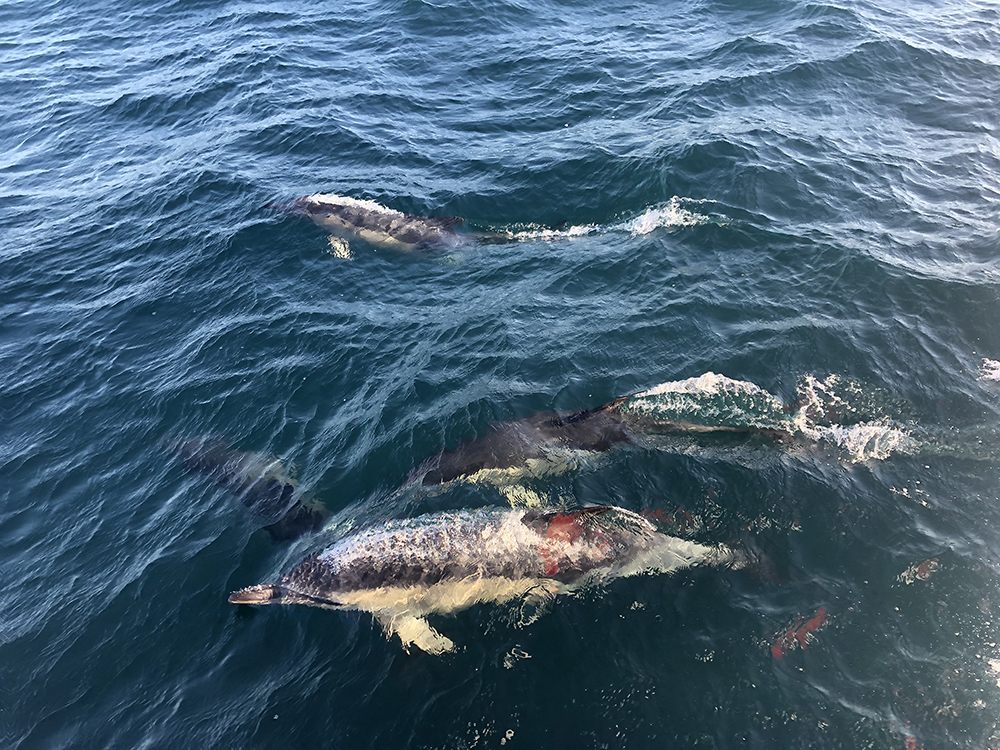 75 miles to Cherbourg, our race to the finish now heading towards Guernsey and Les Casquets