In this blog skipper Gary sums up the 2019 Rolex Fastnet Race 3 months campaign.  Starting in April with gales for a training weekend and finishing with a gripping and fast race round the Fastnet Rock and into Plymouth. 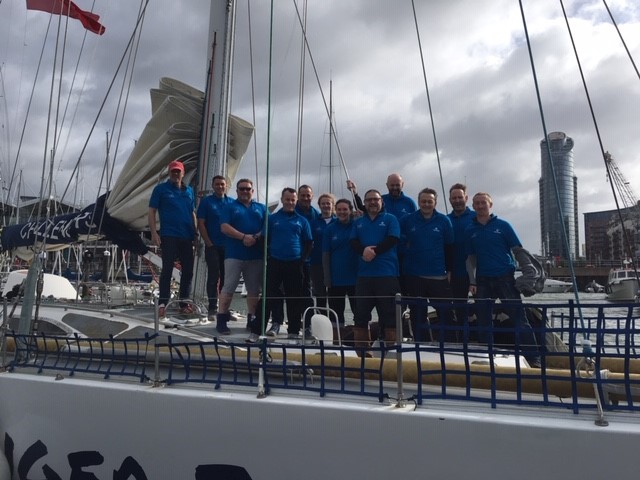 As the dust settles on a 3 month Fastnet campaign, it’s easy to forget how it all started. Late April in Gunwharf quays, Portsmouth. 45 knots of breeze howling through. The first tactical decision, to forgo our first opportunity to sail on the grounds of weather. A decision not taken lightly, though in hindsight absolutely the right one.

The day wasn’t wasted. 8 new crew went through the intricacies and details of rigging a large yacht not just to sail, but how we would get the most possible out of her under racing conditions.
From a Skippers point of view, this weekend was as much about watching as it would be about teaching. How will this group, all from very different backgrounds, come together to form a crew. Who will work together, which personalities will compliment, where our strengths and weaknesses lay.

The Sunday morning and conditions are much more favourable. Up, out, sails up and through the Forts. Before anyone had realised we were south of St Katherine’s doing 12 knots, reefs had been in an out, headsails had been changed. A 20 mile beat back to Portsmouth and our crew would be prepared for their first qualifier in a weeks’ time.

The Cervantes is by a long way my favourite qualifying race. The shortest at 150NM, out through the eastern approaches, passed Nab Tower into Little Hampton and then south to Le Harve. 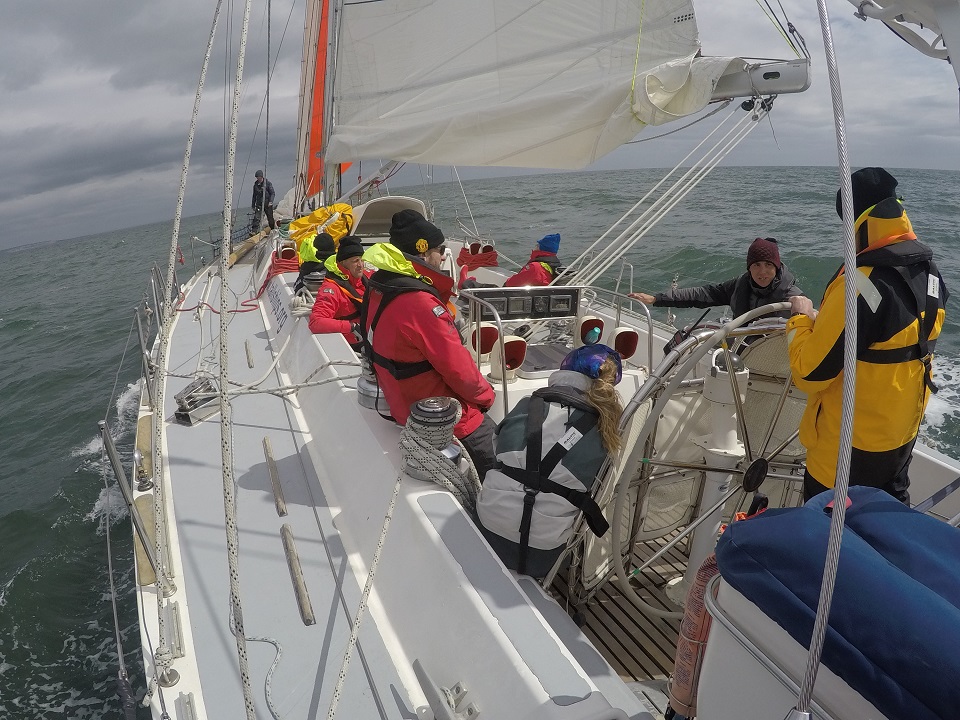 Port Tack in the Cervantes Race

NW on the line made for a great start, the smaller vessels around us attempting Asymmetric spinnakers, not having that option we went No1 and full main, into the sunrise at 11  knots with the front of the pack we hammered it east. With Challengers 1 and 2 in close company we had a great race towards Little Hampton. Around the mark, the fleet spread and the breeze built. A cracking downwind performance from challenger 3 put us leading at the gybe make outside of Le Harve, but a 25NM beat in the small hours of the morning would be our downfall. 1 or 2 poor decisions on my part would see us trail by 25 NM into the finish.

The Myth of Malham

At the end of May was the Myth of Malham, our second qualifier. This 250NM has us rounding the Eddystone Lighthouse outside of Plymouth. This is often regarded as a mini Fastnet, an upwind leg out of the needles and then following the UK South Coast with its tidal gates and ever changeable conditions it would be an ideal warm up to the finale of our series.
Race morning brought very light conditions, and the start time dictated that only 90 Minutes of favourable tide would be available. We played a great initial beat out of the western Solent and across Chichester bay. The game would always be who can hold the shallow water the longest. By Hurst Point, Challenger 2 had snuk ahead and she would stay there for the remainder. Challenger 1 we held most of the way to Eddystone but getting around first would see them benefit from the tide on the way home. 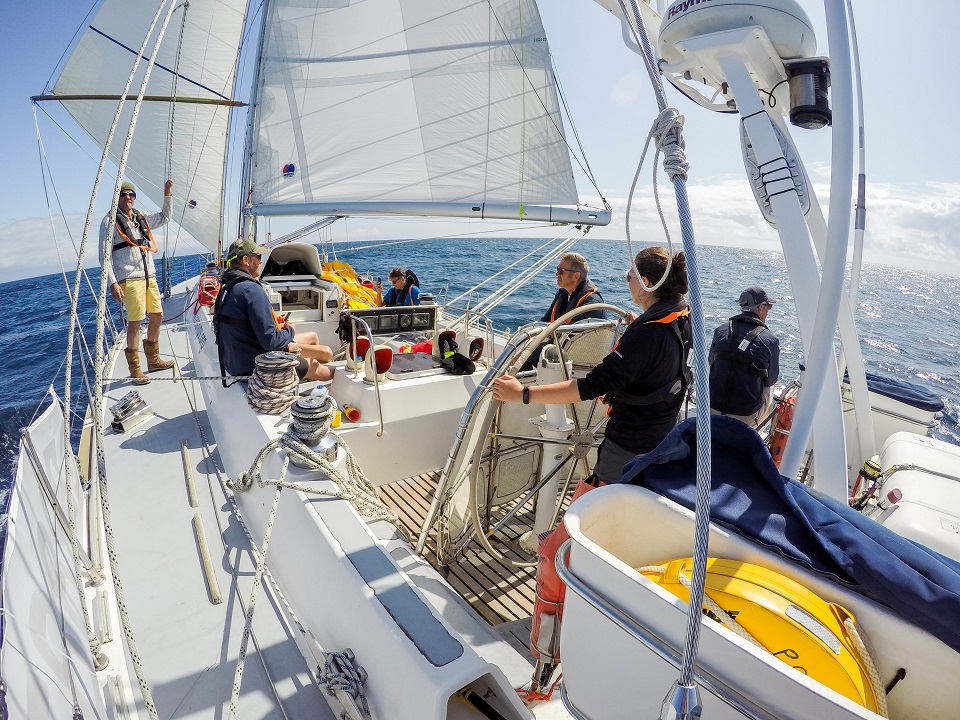 A long gap now until the next qualifier at the end of July. In the meantime, the crew collected together for the ISAF sea survival weekend. There they would be armed with the skills and knowledge to survive the worst. An essential course for all involved in offshore sailing, but all the more prevalent with the 40th Anniversary of the 1979 Fastnet this year.

The final qualifier is the channel race. RORC (Royal Ocean Racing Club) set a Windward Leeward course in the English Channel, normally incorporating a waypoint to be passed and recorded mid channel.

We set out West again, once again in the first light of Saturday morning with some 140 boats. A Close reach this time meaning a quick and easy passage to the needles and once again, all close with Challengers 1 and 2. At the fairway buoy it’s a bare away and for CH3 its spinnaker up. Challenger 1 and 2 going for other tactics but not 1 boat making ground on the other 2 made for a nail biting run into the imaginary mark. An error of judgement on the part of on crew saw us over a mile ahead and playing neck and neck with Challenger 1. 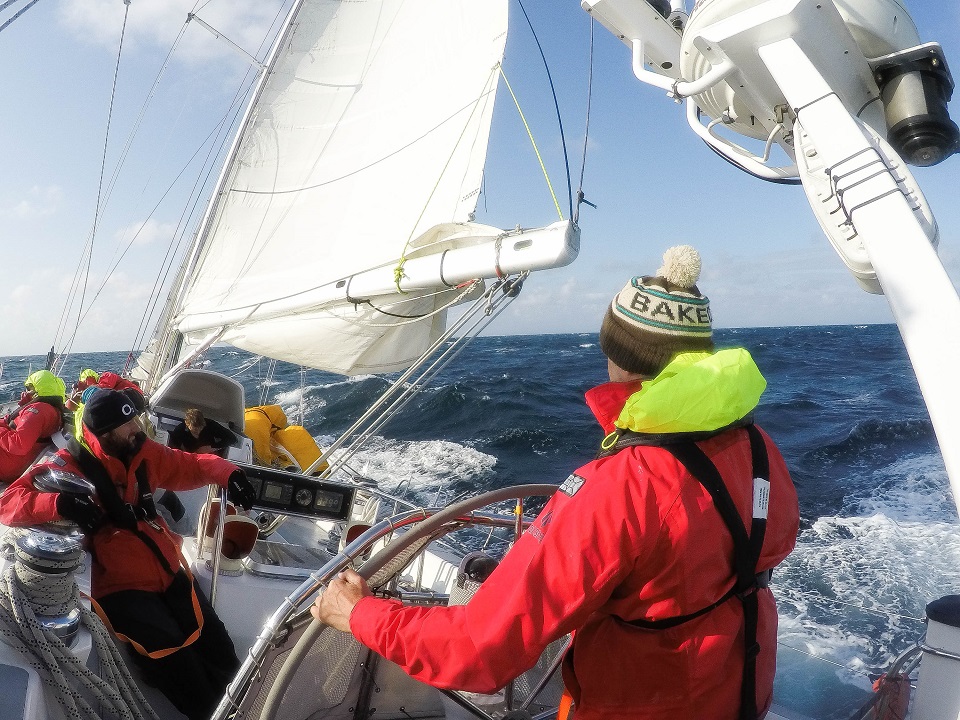 Close hauled on a port tack

Around the mark outside of Poole and the tactics game has had an effect again. Challenger2, despite being behind at the previous mark have leapt and they would lead all the way home.

The final race of course, RORC’s The Rolex Fastnet Race. 438 Boats and some 3500 sailors line up at midday on the 3rd August. West, out of the Needles, Lands End to Starboard, Fastnet Rock to Port, Scilly Isles to Port, Finish Plymouth western breakwater entrance, it really should be that simple. And to start with it really was. A nice reach surrounded by hundreds of boats and out into the English Channel. 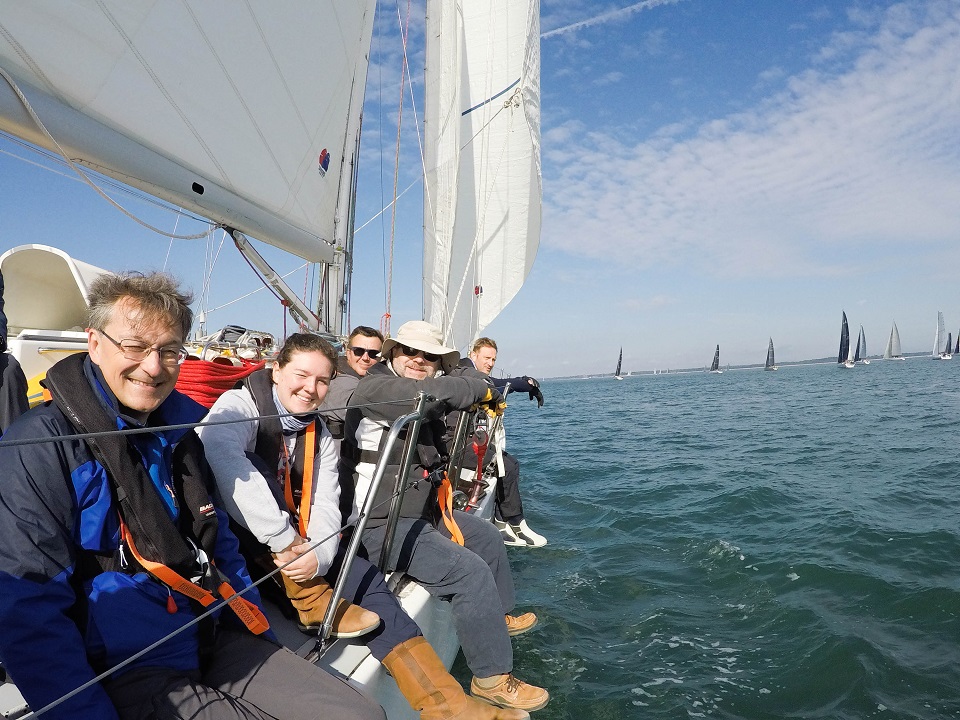 On the leeward rail

The breeze held longer than anyone expected, well into Sunday morning before a well forecast lull becalmed the fleet somewhere south of Portland. A Little drift in the tide and shift in the breeze and we were off again. Heading just west of north and at 6 knots, the tide turns against us. We drop south, covered by challenger 2 for a time before we are separated enough that we can no longer track them. We tacked again for a westerly heading somewhere south of start point giving a cracking heading a speed for the Scillys. A tense few hours followed as we made great progress towards the south edge of the TSS at Lands End.

Shortly before sunset, Challenger 1 reappeared on the screen. Making 4.5 knots but with a better heading some 15 miles to the north of us. The breeze was always forecast to shift west. All we needed was for it to stay south. 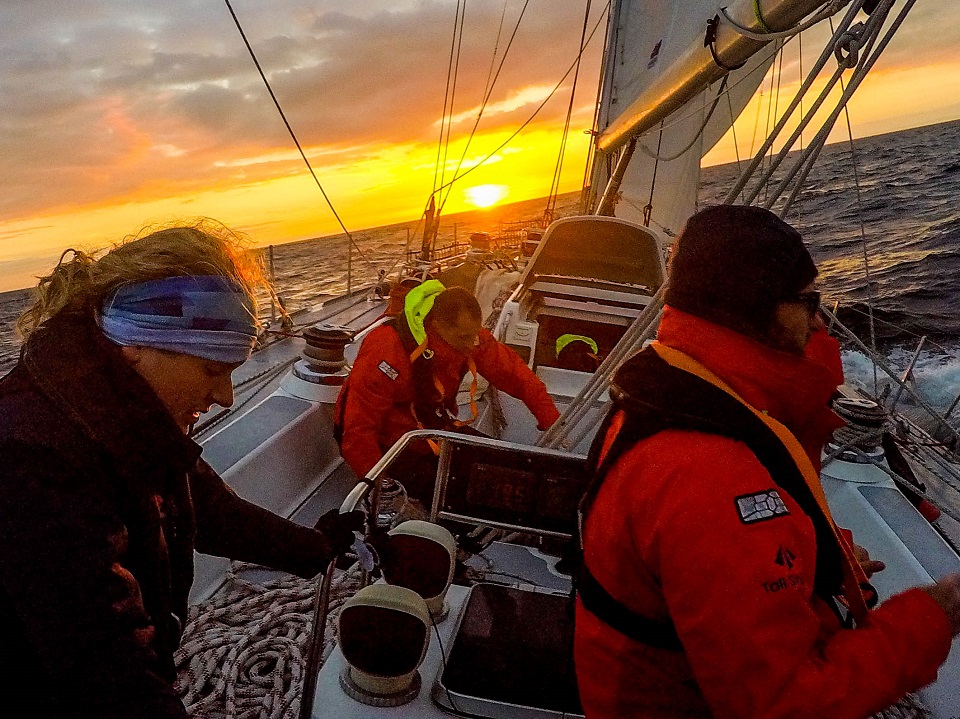 But that wasn’t to be. Nowhere in the campaign has a shift gone in our favour and nowhere was it going to be more relevant to our progress. By the time we made it through the Scilly’s, Challenger 1 had pull 15 miles out of us.

With the breeze now just north of west a close reach for 150NM up to the rock would follow. An ever building sea state and building breeze meant overnight reefing and a challenging sleeping arrangement.

The first glimpse of the Rock appeared with a distant light around sunset on Monday. But rounding it would take a further 6 hours.

Now the road home, 160NM back to the Scillys, a further 100NM to Plymouth and Challenger 1 still within grasp. We charged off, broad reaching in 20 knots of breeze making 10-12 knots . By the Scilly Isles we had Challenger 1 within 10 miles again.

As we bear away at the island we can see challenger 1, they take an inshore line, we straight line it. They disappear, stand on and when they reappear we’ve closed them down to 5 miles. From 10 miles back to 5 miles we were over the moon with that. 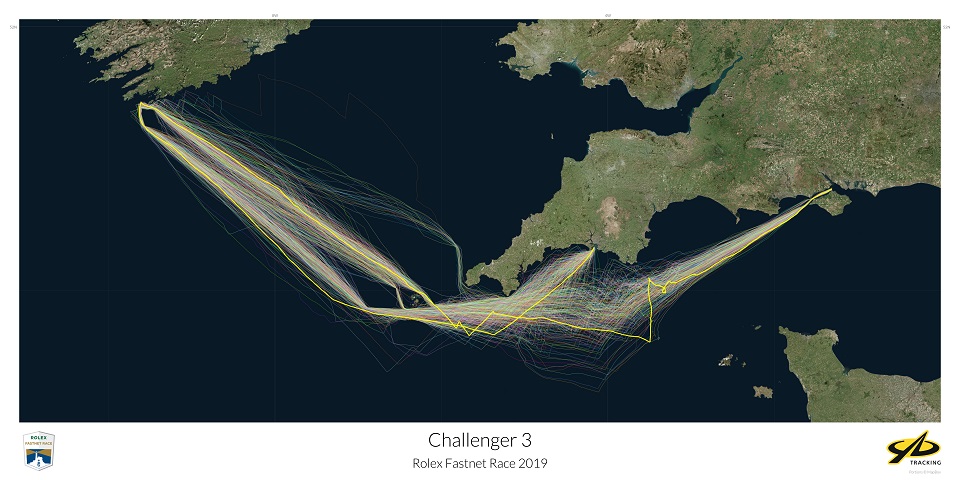 We finished at the western breakwater at 14:15 and 18 seconds on Wednesday 7th August, Just 4 days after starting.

This has been an incredible campaign. For my first as skipper, I was amazed by my crew. I had a great crew, each bringing their own skills and experience, knowledge and understanding. I feel incredibly lucky to have been a part of their campaign.

We completed our time together with a fundraising auction in aid of Tall ships youth trust whose boat we had been racing on. This raised a small fortune, valuable funds needed to continue the life changing youth work that these boats are normally used for.